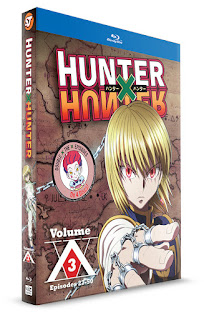 Catch The Latest Episodes Of The Hit Series Based On The Bestselling HUNTER X HUNTER Manga; Set Features 24 Thrilling Episodes!

In the latest home media edition, Gon and Killua head to Heaven's Arena to train. The higher a fighter advances there, the tougher their opponents become! Moving up quickly, the two friends soon meet Zushi, who tells them about the power of Nen, and they begin training under his mentor. But the duo hits a wall on the 200th floor of the tower. Will Gon and Killua gain the strength they need to advance further?

In the original HUNTER X HUNTER manga series, also published by VIZ Media (rated ‘T+’ for Older Teens), Hunters are a special breed, dedicated to tracking down treasures, magical beasts, and even other people. But such pursuits require a license, and less than one in a hundred thousand can pass the grueling qualification exam. Those who do pass gain access to restricted areas, amazing stores of information, and the right to call themselves Hunters.

For more information on HUNTER X HUNTER or other anime and manga titles available from VIZ Media, please visit VIZ.com.

Posted by Leroy Douresseaux at 12:01 PM