Review: "Ghost in the Shell" is a Miscast Misfire 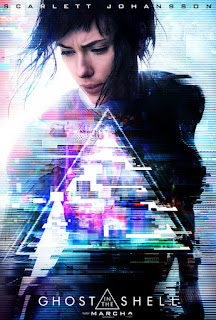 Ghost in the Shell is a 2017 science fiction and action film from director Rupert Sanders.  The film is based on the manga (Japanese comics) created by Masamune Shirow and published in 1989 and 1990.  Ghost in the Shell the movie focuses on a first-of-its-kind cyborg super-soldier that fights terrorists and dangerous criminals.

Ghost in the Shell is set in Tokyo, Japan, in the the near-future.  Most humans have augmented various traits like vision, strength, and intelligence with cybernetics, and the line between human and robotics has blurred.  Major Mira Killian (Scarlett Johansson) is a young woman who survived a terrorist attack that killed her parents.  Her body was destroyed, but she was saved by the world's leading developer of “augmentative technology,” Hanka Robotics, via the secret “Project 2571.”  Mira's brain (her “ghost”) was placed in a mechanical body or “shell.”  Now, she is cyborg counter-terrorism operative in a unit known as “Section 9.”

A year after her rebirth, Major is involved in an operation to discover the whereabouts of the mysterious hacker and cyber-terrorist known only as “Kuze” (Michael Carmen Pitt).  An electronic or digital encounter with Kuze causes the glitches that Major has been suffering to intensify.  Major has also discovered that this case is raising troubling questions about what really happened to her and that will bring her into direct conflict with Hanka's domineering CEO, Cutter (Peter Ferdinando).

I would call Ghost in the Shell mediocre or average, but those words don't quite describe the listless, empty nature of this film.  Ghost in the Shell has been praised for its special effects, soundtrack, and design, but little of that impresses me.  In fact, the visual effects look like leftovers from Steven Spielberg's 2002 film, Minority Report.

Some have been critical of Ghost in the Shell's story and its lack of character development.  Yeah, I would describe it as “lack of character development,” and the screenplay is indeed hackneyed.  You can see it story points coming miles away; everything Major knows is a lie; she shares a past connection with the villain; being a human is the most important thing... yadda, yadda, yadda.

Because Ghost in the Shell is an original Japanese work of fiction, some people were upset that Scarlett Johansson, a white woman, plays the lead.  I have read the original manga, and Major is drawn to look like a white woman.  Even if she were not depicted as white, it still would not bother me all that much that a white actress plays the part of Major.

It is not Johansson's skin color that is the problem.  It is her wooden, monotone performance.  It is as if Scarlett is pretending to be a ghost with no personality that lives inside a mannequin.  It is obvious that I am disappointed in this movie.  As an adaptation of a visually striking manga/comic, Ghost in the Shell is simply a major misfire.


The text is copyright © 2017 Leroy Douresseaux. All Rights Reserved. Contact this blog or site for syndication rights and fees.

Posted by Leroy Douresseaux at 11:33 AM