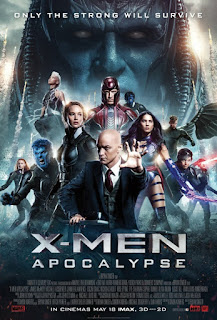 X-Men: Apocalypse is a 2016 superhero movie from director Bryan Singer.  It is 20th Century Fox’s eighth film based on Marvel Comics’ X-Men comic book franchise.  This new movie is a sequel to X-Men: Days of Future Past.  In X-Men Apocalypse, the world's first mutant, a world-destroyer, reemerges and begins a plan for human extinction that the X-Men must stop.

X-Men: Apocalypse opens in Ancient Egypt, 3600BC and introduces En Sabah Nur/Apocalypse (Oscar Isaac), the ruler of that land and a supremely powerful mutant believed to be the very first of his kind.  He is betrayed by some of his worshipers and is buried alive for centuries.  Apocalypse arises in 1983 and is upset to discover what he considers “false gods” to have arisen in his absence.  He gathers “four horsemen” and Erik Lensherr/Magneto (Michael Fassbender) is one of the quartet.  Apocalypse begins to unleash an extinction level plan to clean the Earth of everything and everyone, so that only the strong survive.

Meanwhile, Charles Xavier/Professor X (James McAvoy) continues to build his educational institute in Westchester County, New York.  He is also adding new students, when a former friend, Raven/Mystique (Jennifer Lawrence), returns to warn him of Magneto's new activities.  When they learn the extent of Apocalypse's threat, the X-Men are forced to come together to save the world.

Some believe that Superman: The Movie, originally released in 1978, is the beginning of the modern superhero film.  Other believe that the current age of superhero movies was spearheaded by Tim Burton's 1989 film, Batman.  [Those are good choices, but I believe the current superhero movie rage was born of the surprise (even shocking) success of the 1998 film, Blade.  Its success spurred Fox into producing X-Men (2000), which was a hit and which really pushed superhero movie production into overdrive.]

I am starting to believe that the most influential film in the current onslaught of superhero movies is 2012's Marvel's The Avengers.  Why?  The Avengers' immediate and massive success at the box office was practically unprecedented.  It's opening weekend dollar gross set what was at the time a record for North American box office.  It's worldwide box office exceeded a billion dollars, and while that was not the first time a superhero movie crossed the billion-dollar mark (which 2008's The Dark Knight did first), I don't think anyone, not Disney, Marvel, box office watchers, or movie fans, expected The Avengers to be so successful in terms of box office – not before its release.

Such surprising success breeds copycats.  Superhero movies that are big, even massive, and filled with destruction followed The Avengers.  See Warner Bros. The Man of Steel (2013) and Batman v. Superman: Dawn of Justice (2015).  In fact, the latter is Warner Bros. desperate attempt to make an Avengers-like movie featuring characters from DC Comics, which is, like Warner Bros., part of Time Warner.

To me, X-Men: Days of Future Past was trapped between being 2011's X-Men: First Class and Marvel's The Avengers.  X-Men: Apocalypse reeks of the desperation to be like The Avengers.  20th Century Fox owns the film rights to Marvel Comics X-Men franchise, and as Fox makes one mediocre and/or financial failure X-Men movie after another, they cannot help but look at Marvel Studios' unprecedented success with the Marvel Comics characters to which it still has film rights.  Hell, Fox isn't the only Hollywood studio that wants to be like Marvel.

But the X-Men are not the Avengers.  The Avengers are a gathering of loosely connected superheroes who come together to defend Earth – or avenge it.  The X-Men can be superheroes, but their story has largely been about a racial minority, known as “Mutants,” that bands together for protection.  Their acts of heroism are essentially a defense of the race or species.  It is as if the X-Men's heroic actions declare that they can peacefully coexist on this planet with humans, which gives them reason to want to defend it.

X-Men: Apocalypse is just a big action movie.  Familiar X-Men themes:  fear, racism, bigotry, tribalism, unity, extended families, familial and friendship bonds, etc. are just window dressing for big special effects driven and created set pieces.  X-Men: Apocalypse does not take from the wheelhouse of the best X-Men films (such as the first two films in the franchise); instead, it steals from Marvel's The Avengers and even Michael Bay's Transformers movies.

You know what, dear reader?  I've taken enough of your time.  I hate this movie.