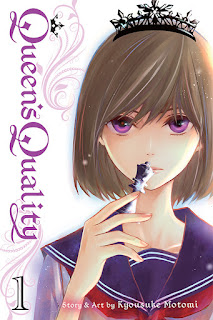 QUEEN’S QUALITY is rated ‘T’ for Teens and will be published under the Shojo Beat imprint. Volume 1 will carry a print MSRP of $9.99 U.S. / $12.99 CAN. The series also launches digitally via VIZ.com and the VIZ Manga App, as well as from the Nook, Kobo, Kindle, iBooks, comiXology, and Google Play stores. Subsequent volumes of the series, which is ongoing in Japan, will be published in English four times a year.

In QUEEN’S QUALITY, Fumi Nishioka lives with Kyutaro Horikita and his family of “Sweepers,” people who specialize in cleaning the minds of those overcome by negative energy and harmful spirits. Fumi has always displayed mysterious abilities, but will those powers be used for evil when she begins to truly awaken as a Queen?

“Fans will not want to miss the return of Kyutaro and Fumi in this action and romance packed sequel,” says Amy Yu, Editor. “Find out their fates as the pair face off against menacing new paranormal threats while their feelings for each other continue to grow.”

Manga creator Kyousuke Motomi debuted in Japanese shojo manga magazine Deluxe Betsucomi with Hetakuso Kyupiddo (No Good Cupid) in 2002. She is the creator of DENGEKI DAISY, BEAST MASTER and QQ SWEEPER, all available in North America from VIZ Media.

For additional information on QUEEN’S QUALITY and other manga titles distributed and published by VIZ Media, please visit VIZ.com.