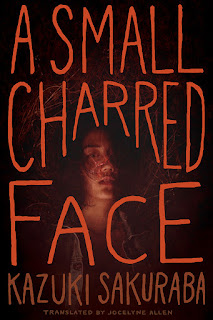 A SMALL CHARRED FACE was written by Kazuki Sakuraba, whose previous critically acclaimed novel, Red Girls: The Legend of the Akauchibas, was also published by Haikasoru. A SMALL CHARRED FACE will be released in print with an MSRP of $15.99 U.S. / $21.99 CAN. An eBook edition will also debut on September 19th in the Amazon Kindle, Apple’s iBooks Store, Barnes & Noble’s Nook Book Store, the Kobo eBooks Store, and the Google Play Store.

In A SMALL CHARRED FACE, a boy name Kyo is saved from the precipice of death by Bamboo, a vampire born of the tall grasses. They start an enjoyable yet strange shared life together, Kyo and the gentle Bamboo. But for Bamboo, communication with a human being is the greatest sin.

“Sakuraba captivated North American readers with her award-winning novel, RED GIRLS, and she returns with a unique new story that depicts the relationship between vampires and modern youth in A SMALL CHARRED FACE,” says Nick Mamatas, Editor. “We invite readers to discover the unconventional, yet poignant and tender dynamic that develops between Bamboo and Kyo in this gripping new release.”

Author Kazuki Sakuraba was born in 1971 and began publishing while still in college. Her early Gosick light novels were best sellers and were translated into English, and her adult fiction is also popular and critically acclaimed.  Red Girls: The Legend of the Akauchibas won the Mystery Writers of Japan Award in 2007 and was translated into English in 2015. Watashi no otoko, a suspense novel about an incestuous relationship, won the Naoki Prize for popular fiction in 2008.

For more information on A SMALL CHARRED FACE and the Haikasoru imprint, please visit Haikasoru.com.

For more information on other titles available from VIZ Media, please visit VIZ.com.