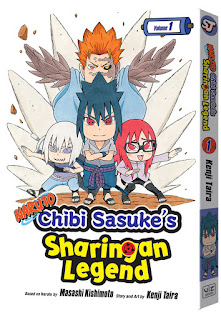 NARUTO: CHIBI SASUKE'S SHARINGAN LEGEND is written by Kenji Taira. The series is rated ‘T’ for Teens and will be published in print and digital editions under the Shonen Jump imprint; Volume 1 will carry a print MSRP of $9.99 U.S. / $12.99 CAN.

NARUTO: CHIBI SASUKE'S SHARINGAN LEGEND will be available digitally via VIZ.com and the VIZ Manga App, as well as from the Nook, Kobo, Kindle, iBooks, comiXology, and Google Play Store. Subsequent volumes of the series, which is also continuing in Japan, will be published in English on a quarterly basis.

Uchiha Sasuke, the brooding loner who will do anything to avenge his clan and kill his older brother… Yes, this is that story, but with a funny twist! In NARUTO: CHIBI SASUKE'S SHARINGAN LEGEND the characters and story have been flipped on their heads, all for the sake of comedy! With his Taka teammates Suigetsu, Karin and Jugo, Sasuke travels the land and gets into all kinds of wacky adventures. This is a side of Sasuke you’ve never seen before. One bit of advice: do not mock the Uchiha!

“Naruto’s best friend and rival, Sasuke, returns in this hijinks-filled new series,” says Alexis Kirsch, Editor. “We hope fans enjoy the ‘chibi’ art-style that adds to the hilarious flavor of the series, and takes the NARUTO canon in a fun new direction!”

NARUTO manga series creator, Masashi Kishimoto, was first inspired to become a manga artist in elementary school when he read DRAGON BALL. After spending time in art college, he won the Hop Step Award for new manga artists with his story Karakuri. After considering various genres for his next project, Kishimoto decided on a story steeped in traditional Japanese culture. His first version of NARUTO, drawn in 1997, was a one-shot story about fox spirits; his final version, which debuted in Weekly Shonen Jump in 1999, quickly became the most popular ninja manga in the world. The series would also spawn multiple anime series, movies, novels, video games and more. Having concluded NARUTO in late 2014, Masashi Kishimoto has kept himself busy with the side stories such as NARUTO: THE SEVENTH HOKAGE AND THE SCARLET SPRING and writing the story for the latest NARUTO anime movie, BORUTO: NARUTO THE MOVIE, both of which focus on the title character's son, Boruto.

For additional information on NARUTO and other manga titles distributed and published by VIZ Media, please visit VIZ.com.