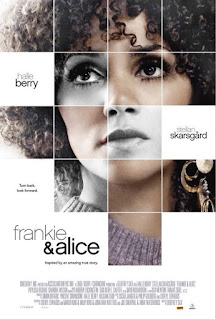 Frankie & Alice is a 2010 Canadian drama from director Geoffrey Sax and starring Halle Berry.  The film received a limited theatrical release in 2010 in order to qualify for the 2010-2011 movie awards season.  It did receive a wider theatrical release in August 2014.  Frankie & Alice follows a go-go dancer with multiple personality disorder and the psychotherapist who tries to help her.

Dr. Oswald believes that Frankie suffers from multiple personality disorder (now known as “dissociative identity disorder”).  He identifies that Frankie has two other personalities:  “Genius,” a seven-year-old child; and “Alice,” a Southern racist White woman.  “Genius” and “Alice” are aware of each other, but Alice wants control of Frankie.  In order to discover a way to help Frankie, Dr. Oswald must uncover a terrible trauma in Frankie's past that is either forgotten or kept secret.

Halle Berry had apparently been trying to get Frankie & Alice produced since the 1990s.  Serious movement began on the film around 2004, apparently, but it was another six years before the film saw even a limited theatrical release.  That was reportedly almost two years after the film had finished production.  That is a shame really, because Frankie & Alice is a good movie.  In this film, Berry gives one of the best performances of her career, one that I think is on par with her Oscar-winning turn in 2001's Monster's Ball.

As a film, Frankie & Alice is not a fancy, big, prestige biographical drama in the tradition of such films as A Beautiful Mind and The King's Speech.  However, it is not quite one of those infamous disease-of-the-week made-for-television movies.  In some ways, the film is similar to a two-actor stage drama, focusing on the characters that Berry and Stellan Skarsgard portray.  Although he delivers a nice performance, Dr. Oswald is not close to Skarsgard's best work, and that is mainly because the character is not that well developed.  The movie gives us glimpses into him, but that is as far as that goes.

Watching the film and trying to follow its story, it is easy to see that eight different writers worked on it over the course of many years.  Frankie & Alice does have a patchwork feel to it.  There are so many other good characters with small roles, like Frankie's mother, Edna (Phylicia Rashad), and sister, Maxine (Chandra Wilson).  These two characters could have enriched both their stories and Frankie's.

Still, Halle Berry, of whom I am a huge fan, is so good here.  She carries this movie in a way that engages the audience with Frankie, but also with the characters, “Genius” and “Alice.”  Quite frankly, Berry should get credit for giving three excellent performances.  Her turn as the troubled and brittle “Alice” is superb; she sells that character as genuine, but she makes you believe that “Alice” could be a menace to Frankie.  Her turn as the sweet, but fearful “Genius” is heartbreaking and borders on brilliant.

Berry does not give one of those showy performances that cries out for an Oscar nomination, which she deserved, but did not get for this film.  She honestly plies her craft as an actor, and delivers a brilliant performance as an artist.  In fact, whatever faults it has, Frankie & Alice is still a quality drama because Berry is at its center delivering stellar work.