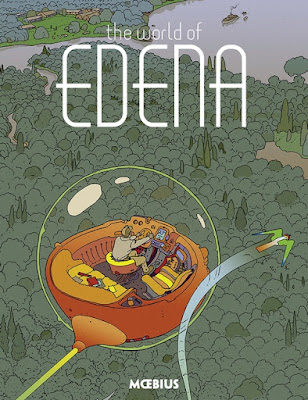 FOR EMERALD CITY COMIC CON: Dark Horse Comics in partnership with Moebius Production in France is proud to reveal the first several volumes in the forthcoming Moebius Library, beginning with The World of Edena.

2016 represents not only Dark Horse Comics’ 30th anniversary, but also Moebius’s 60th anniversary of his very first published comic.  Collecting all the Edena short stories in a deluxe, hardcover edition, The World of Edena includes “Upon a Star,” “Gardens of Edena,” “The Goddess,” “Stel,” and “Sra.” Although several had been translated into English in the 1980s, this will be the first time “Sra” has been available to English-language audiences.

Stel and Atan are interstellar repairmen trying to find a lost space station and its crew. What they discover about the universe and themselves on the mythical paradise planet Edena, though, changes their lives forever.

“Moebius’s Arzach had a great impact on me.  But it’s definitely true that I created Nausicaä with Moebius’s influence.”—Hayao Miyazaki

“Moebius excelled as much in the fluidity of his storytelling as he did in the brilliance of his linework. There’s real beauty in his work. It’s quite a rare thing for an artist to be able to translate so much of the scale and grandeur and detail of their own imaginings into simple, elegant lines that can be so easily shared with others.”—Frank Quitely

“He is a master draftsman, a superb artist, and more: his vision is original and strong.”—George Lucas

“I read [Métal Hurlant] over and over and envied the French because they had everything I dreamed of in comics – beautifully drawn, visionary and literate comics, for adults. I wanted to make comics like that when I grew up."—Neil Gaiman


About Jean Giraud/Moebius
Jean Giraud was born in 1938 in Nogent-sur-Marne, France. After starting his career at age sixteen, he collaborated with many great artists, writers, and filmmakers. Jean Giraud used his Moebius pen name mainly when he worked on his humor, fantasy, and science-fiction stories. After cofounding the Humanoïdes Associés publishing house, which launched Heavy Metal magazine (Métal Hurlant in French) in 1975, Jean Giraud continued to develop a unique and innovative style under the name Moebius. His collected volumes include Arzach (1975), The Airtight Garage (1976), and The Incal (1980) with writer Alejandro Jodorowsky. Moebius’s film work includes storyboards and concept designs for Alien, Time Masters, Tron, The Abyss, and The Fifth Element. In the US, Moebius started his own publishing house, Starwatcher, and he also completed several mainstream projects, such as Silver Surfer: Parable with Marvel Comics’ Stan Lee (1988). In France in 1997, he started the Moebius Production/Stardom publishing house with his wife, Isabelle, releasing 40 Days in the Desert B (1999), Le chasseur déprime (2008), and the Inside Moebius series (2004-2010). Throughout his life, Jean Giraud / Moebius had major art exhibitions in Europe and Asia, but it was not until 2010 in Paris that he was the subject of a retrospective exhibition, held by the Fondation Cartier and titled Moebius-Transe-Forme. He died in his home in Montrouge, France, on March 10, 2012, at the age of seventy-three.

Posted by Leroy Douresseaux at 5:44 AM