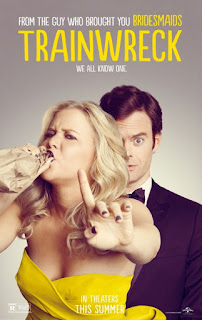 Trainwreck is a 2015 comedy and romance directed by Judd Apatow and written by and starring Amy Schumer.  The film focuses on a woman who prefers sexual encounters instead of committed relations and who then meets the kind of good guy that she cannot simply leave.

Amy Townsend (Amy Schumer) is a party girl who drinks too much, smokes weed, and sleeps around with other guys, even when she has a boyfriend, as her current boyfriend, the muscle-bound gym-addict, Steven (John Cena), is about to discover.  Amy learned her promiscuous ways from her father, Gordon Townsend (Colin Quinn), who once told her that monogamy is not realistic.   Strangely, Amy's sister, Kim (Brie Larson), is doing just fine with her boyfriend, Tom (Mike Birbiglia), and she is even more of a mother than a stepmother to Tom's son, Allister (Evan Brinkman).

Amy writes for a raunchy men's magazine, “Snuff.”  Her boss, Dianna (Tilda Swinton), assigns her to write an article about a sports doctor named Aaron Conner (Bill Hader).  After Aaron helps her with a family matter, Amy feels a bond with him and even has sex with him.  However, Aaron sees that as the beginning of a romance, while Amy sees the sex as a one-night stand.  Amy tries to find a way to avoid monogamy, even when part of her starts to believe that Aaron could be the good guy she needs to keep.

If you like Amy Schumer (and I do), you will like Trainwreck (and I do – for the most part).  As a romantic comedy, however, the film really doesn't work.  Bill Hader is a comedian and a professional impersonator (at which he is quite good), but he has no business trying to be a romantic lead.  There is nothing remotely interesting about him in this film; he delivers what is almost a zombie performance.

I really don't buy Schumer as a romantic lead or as a magazine writer.  Schumer is at her best when she is skewering social, sexual, and gender conventions.  The character Amy Townsend is at her best when she is being a one-night stand or is mocking other people's ambitions of respectability.  When actress Amy tries to make fictional Amy fall in love... well, it's a trainwreck.

Tilda Swinton gives a killer performance as Amy's despicable boss, Dianna.  Swinton can disappear behind even the least amount of movie make-up and hair with the best of them.  John Cena delivers a sparkling two-scene performance as Steven.  Every time Colin Quinn is on screen as Amy's father, Gordon, he is a delight to see.  Director Judd Apatow does not do much here, except get out of Amy Schumer's way, which works when it works, but he does nothing to save the last third of this film which is a... trainwreck.

Still, for most of this movie, Amy Schumer proves why she is currently an it-girl.  She is brilliant when she is at the top of her game, and in Trainwreck, she occasionally shows off her brilliance.

Posted by Leroy Douresseaux at 5:41 AM