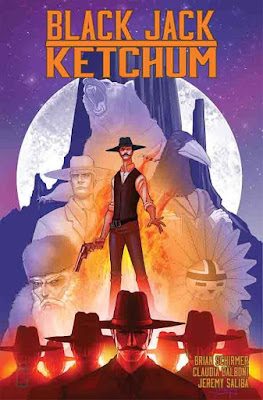 "It is righteous good, man. Schirmer has serious chops. Definitely pick this up!!" —Greg Rucka

In a dreamlike version of the Old West, Tom Ketchum struggles to clear his name—and stay alive—when he’s mistaken for wanton outlaw “Black Jack” Ketchum. With the aid of his talking sidearm, a secretive gambler, and a mute girl with a Winchester, Tom evades the mysterious Union and its supernatural enforcers, the faceless Dusters.

BLACK JACK KETCHUM TP (ISBN 9781632157034) hits comic book stores on Wednesday, June 8, 2016 and bookstores on Tuesday, June 14, and will be available for $14.99. It can be ordered by retailers through Diamond Book Distributors with the Diamond Code MAR160615. It can be preordered now on Amazon, Barnes & Noble, Indiebound, and Indigo.

“Black Jack Ketchum is an exciting spin on the Weird Western, an explosion of iconography from a major new talent!”—Paul Cornell (Doctor Who, Wolverine)

"9 out of 10. A completely unexpected and wholly welcome addition to a revived genre, and like East of West, it opens a doorway to the weird through the shopfront of the familiar."—Newsarama

“An odd but compelling read, Black Jack Ketchum presents a supernatural mystery in the last wild place of the American frontier; a place where anything can happen and it does.”—Fangoria

“Black Jack Ketchum is a gun-toting whirlwind, a ‘wilder’ west if you will. I’m excited to see where it goes.”—Jim Zub (WAYWARD, Samurai Jack)