Review: Retro "Star Wars: The Force Awakens" Kind of Like a Reboot 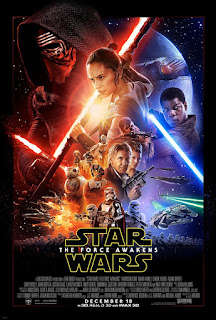 Star Wars: The Force Awakens is a 2015 science fiction-fantasy action film directed by J. J. Abrams.  It is the seventh installment in the Star Wars film series, which began with the 1977 Oscar-winning film, Star Wars, created by George Lucas.  The Force Awakens is set 30 years after the events depicted in Return of the Jedi (1983).  This film follows a desert scavenger, a renegade stormtrooper, and an X-wing fighter pilot as they fight a new enemy, which is personified by a young dark warrior who is strong with the Force.

Star Wars: The Force Awakens opens approximately 30 years after the Rebel Alliance's defeat of the Galactic Empire and the destruction of the second Death Star.  However, the most famous hero of that battle, Luke Skywalker (Mark Hamill), the last Jedi, has since disappeared.  The First Order has risen from the remains of the Empire, and is led by the mysterious Supreme Commander Snoke (Andy Serkis), who has two immediate goals.  He wants to destroy the New Republic (which was created by the Rebel Alliance) and its military wing, The Resistance, and will use his super-weapon, Starkiller Base, commanded by General Hux (Domhnall Gleeson), to do so.

To find Skywalker, Snope has tasked Kylo Ren (Adam Driver), a young dark warrior who is strong with the Force.  Ren's search for information about Skywalker's whereabouts has led him to the desert planet, Jakku.  There, Ren has a confrontation with a Resistance pilot, Poe Dameron (Oscar Isaac), which troubles a young First Order stormtrooper, FN-2187 (John Boyega), who is a witness to Dameron's capture.

Meanwhile, an astromech droid, BB-8, escapes into the Jakku night.  BB-8 eventually meets Rey (Daisy Ridley), a young scavenger who will be the key to getting BB-8 and the crucial information he holds to the Resistance.  And legends of the past, Han Solo (Harrison Ford), General Leia Organa (Carrie Fisher), and Chewbacca (Peter Mayhew) will help her.

Truthfully, I am in love with the new Star Wars characters, especially Rey and Finn (known by his First Order masters as FN-2187).  I have also found a place in my heart for Poe, Kylo Ren, General Hux, Maz Kanata (Lupita Nyong'o), and the actors playing them.  I have added BB-8 to my beloved droid duo of R2-D2 and C-3PO.  I think that Daisy Ridley as Rey and John Boyega as Finn are among the best actors ever to appear in a Star Wars film, and the script allows them to give what may very well be two of the best dramatic performances every given in this franchise.

On the other hand, the movie itself is odd.  I love Star Wars: The Force Awakens, but not unconditionally.  I have to admit that I have mixed emotions because this is the first Star Wars film that George Lucas has not directed (and he directed four of them) or at least guided to fruition.  Thus, a part of me wants to see this film as fan-fiction.

Whatever one might say about the prequel films (The Phantom Menace, Attack of the Clones, and Revenge of the Sith), they were ambitious.  Star Wars: The Force Awakens merely seeks to entertain and to thrill.  It is escapist entertainment like no other – just as Star Wars was back in 1977.  There was nothing like Star Wars, and its simple story, filled with universal themes, resonated with audiences.  That is true of Star Wars: The Force Awakens.  I found myself exhilarated, and I often could not take my eyes off the screen.  I laughed and some scenes even tried to make me cry.

As I edit this, it has been over two weeks since I saw Star Wars: The Force Awakens.  I have thought about it often, and I put off writing this review.  I have read other reviewers' opinions.  A writer for The Village Voice called it “the third good Star Wars” movie.  I think it is the fourth best Star Wars movie, behind the original three films, and a little ahead of Star Wars: Episode I – The Phantom Menace.

I think I need to warm up more to Star Wars: The Force Awakens, which might happen after repeated viewings.  Still, I think the future is bright for the new films.  Right now, I'd follow Rey, Finn, Poe, BB-8, and even Kylo Ren anywhere, and my favorite Star Wars character is back.  Regardless of the story, the characters are the ones I have always loved.  I am glad that some of the classic ones are back and that they have brought cool new ones with them.

Posted by Leroy Douresseaux at 5:10 AM