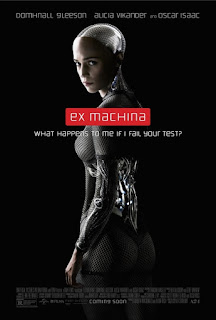 SCI-FI/DRAMA with elements of a thriller

Ex Machina is a 2015 science film from writer-director Alex Garland.  The film focuses on a young programmer chosen to evaluate a female A.I. on her human qualities.  Oscar-winning producer Scott Rudin is one of this film's executive producers.

Shortly after he arrives, Caleb learns that Nathan has built a humanoid robot (or android) named Ava (Alicia Vikander) that possesses artificial intelligence (A.I.)  Nathan wants Caleb to administer “the Turing test” to Ava.  This test is designed to measure an A.I.'s ability to persuade the tester that it is human.  Ava is breath-taking in appearance, and Nathan discovers that he can relate to her despite knowing that she is artificial.  Ava may be an android, but her feminine wiles prove to be more formidable than Caleb could ever imagine.

Alex Garland has proved to be a talented novelist and filmmaker.  His wrote the screenplay for the film, Dredd, one of the best film adaptations of a comic book to be released this decade.  In Ex Machina, he makes use of special effects in subtle ways, and that serves to make this film seem both plausible and tangible.  Like Spike Jonze's Her, Ex Machina seems to be set in some near-future, a decade or so from now.  The manner in which Garland presents Ava makes it seem as if a sentient android A.I. is just a few years from appearing.  In fact, this movie makes me believe that somewhere in our world, in a hideaway compound, nestled in the mountains, a billionaire tech genius is probably halfway to making his own Ava.

Ex Machina is stylish, but substantive, but where it is spare, beauty comes through.  It is as if Garland uses an eye-candy aesthetic to spin his ideas and theories.  He shrewdly intertwines romance, character melodrama, dramatic conflict, and pulp thrills while composer Geoff Barrow's score enhances everything to great affect.  In fact, Barrow has invented a “soundscape” that makes Ex Machina less ethereal and speculative, but more vivid and life-like.

This shrewd, speculative science fiction film could not work without high-quality performances from its actors.  It should be no surprise that Oscar Isaac delivers a complex man who is maddeningly fascinating and repulsive in Nathan.  Isaac's presence is so strong that it is hard to believe that Nathan is apparently a “supporting character.”  Isaac is about to blast off into wider fame in the upcoming Star Wars: The Force Awakens, and so is his costar, Domhnall Gleeson, who is also appearing in the seventh installment of the Star Wars film franchise.

Gleeson delivers a complicated character in Caleb.  Other than realizing that he is smitten with Ava, the viewer might find Caleb hard to figure out.  The character is well written, and Gleeson translates that into a character that, like a real person, hides so much behind the facade of his face.

Alicia Vikander also seems to be close to being a breakout actress, but perhaps she will prove to be a fine dramatic actress instead of merely being a pretty face who is cast in splashy Hollywood flicks for a few years.  Her layered, textured performance makes Ava seem spare, aloof, mysterious, and even cold.  However, Vikander makes you believe that there is so much more to Ava, more than anyone, even her creator, can ever know.

With its themes that recall Frankenstein, Ex Machina is a sleek film with both Gothic and futuristic sensibilities.  As much as I like it, I find the last 10 minutes of the film to be flimsy because the ending seems tacked on more than it seems predictable (which it is).  Despite that, I still think that Ex Machina is an exceptional science fiction film that is worth watching.  Consider it a cautionary tale about our future or perhaps, consider it a sign post along the road to the Twilight Zone.


Posted by Leroy Douresseaux at 4:12 AM