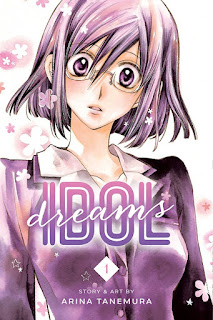 IDOL DREAMS is rated ‘T’ for Teens and will be published in print under the Shojo Beat imprint with an MSRP of $9.99 U.S. / $12.99 CAN. The series also launches digitally on November 3rd via VIZManga.com and the VIZ Manga App, as well as from the Nook, Kobo, Kindle, iBooks, comiXology, and GooglePlay stores.

Shojo manga creator Arina Tanemura has drawn wide acclaim for her prior works, which include FULL MOON, THE GENTLEMEN’S ALLIANCE †, and SAKURA HIME: THE LEGEND OF PRINCESS SAKURA (all available from VIZ Media). In IDOL DREAMS, a career woman radically transforms her physical appearance into her teenage self with the aid of an experimental drug to seize the missed chances of her youth. VIZ Media will publish future volumes of the series, which is continuing in Japan, on a quarterly basis.

At age 31, office worker Chikage Deguchi feels she missed her chances at love and success. When word gets out that she’s a virgin, Chikage is humiliated and wishes she could turn back time to when she was still young and popular. She takes an experimental drug that changes her appearance back to when she was 15. Now Chikage is determined to pursue everything she missed out on all those years ago – including becoming a star!

“Arina Tanemura has enthralled manga readers across North America with her unique stories, memorable characters and beautiful artwork. IDOL DREAMS is sure to delight new and existing fans alike,” says Nancy Thistlethwaite, Senior Editor. “This is Tanemura’s first series featuring an adult heroine. Will Chikage choose youth and stardom, or will she embark on a romance as her 31-year-old self with an old friend? Find out in Idol Dreams!”

Posted by Leroy Douresseaux at 8:51 AM