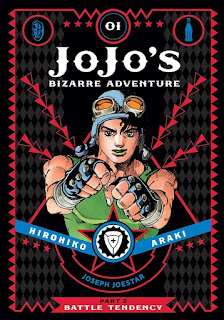 The opening volume of the second story arc of the long-running series, JOJO’S BIZARRE ADVENTURE: PART 2 —­­­ BATTLE TENDENCY is rated ‘T+’ for Older Teens and will be published in print with an MSRP of $19.99 U.S. / $22.99 CAN. The series is presented in lavish 2-in-1 hardbound deluxe collector’s editions.

Digital versions of the complete 3-volume JOJO'S BIZARRE ADVENTURE: PART 2 – BATTLE TENDENCY story arc are available now for $10.99 each (US/CAN) across all platforms serviced by VIZManga.com and the VIZ Manga App, as well as from the Nook, Kobo, Kindle, iBooks, comiXology, and GooglePlay stores.

As the BATTLE TENDENCY story arc opens, the Joestar family is called upon to do battle against evil again! This time, it’s Joseph Joestar, the grandson of Jonathan Joestar! And his enemies are more powerful and diabolical than ever! Behold! The terror of the Pillar Men!

"With its hyper-stylized art work and mind-melting action sequences, wonderfully outlandish characters and sprawling storyline, JOJO'S BIZARRE ADVENTURE is a series as unique as it is compelling," says Urian Brown, Editor. "This new story arc, BATTLE TENDENCY, comes in gorgeous hardcover editions that old school fans will be proud to display on their bookshelves."

Additional information on JOJO'S BIZARRE ADVENTURE and other manga series from VIZ Media is available at www.VIZ.com.

Posted by Leroy Douresseaux at 5:33 AM