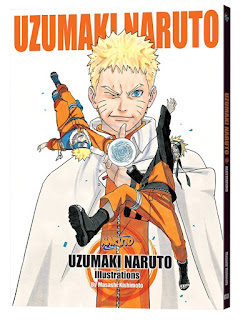 San Francisco, CA – VIZ Media, LLC (VIZ Media), the largest publisher, distributor and licensor of manga and anime in North America, gives NARUTO fans the opportunity to expand their personal collections with the release in November of UZUMAKI NARUTO: ILLUSTRATIONS, a new, full-color art book featuring works from the NARUTO series by its acclaimed creator, Masashi Kishimoto. Original NARUTO ninja adventures in fiction form are also set for release in early November as VIZ Media announces NARUTO: KAKASHI’S STORY, the first of a new series of NARUTO prose novels focusing on key characters from the series and complemented by original cover art by Masashi Kishimoto.

Masashi Kishimoto made his first-ever international professional appearance as an exclusive Guest of Honor at New York Comic Con 2015 this past month. The NARUTO manga series finale, Volume 72, was released in print and also digitally on October 6th, 2015, bringing the long-running ninja action adventure to its thrilling conclusion.

The third full-color art book from the hit manga series NARUTO! Experience Masashi Kishimoto's artwork in all of its colorful glory in this collection of images from the finale of the best-selling Naruto manga! Naruto, Sasuke, Sakura, Kakashi and all your favorite characters appear in nearly a hundred pages of gorgeous full-color images. The book also features commentary from Masashi Kishimoto, a beautiful double-sided poster and a sticker sheet!

In the first in a new series of prose novels straight from the worldwide smash hit franchise, Naruto’s allies and enemies take center stage in these fast-paced adventures, with each volume focusing on a particular series character.

In NARUTO: KAKASHI’S STORY, a year has passed since the Fourth Great Ninja War, and Kakashi’s appointment to Hokage looms. But first he heads to the Land of Waves for a dangerous mission rescuing hostages from a top secret airship. There he confronts a ninja whose heart is frozen by tragedy. Having lost both his friend’s eye and his greatest abilities, can Kakashi really protect anyone? What is the true meaning of the will of fire gained in the distant heavens? Kakashi finds these answers and more as he opens the door to a new ninja era.

Manga author/artist Masashi Kishimoto was born in 1974 in rural Okayama Prefecture, Japan. Like many kids, he was first inspired to become a manga artist in elementary school when he read Dragon Ball. After spending time in art school, he won the Hop Step Award for new manga artists with his story, Karakuri. After considering various genres for his next project, Kishimoto decided on a story steeped in traditional Japanese culture. His first version of NARUTO, drawn in 1997, was a one-shot story about fox spirits; his final version, which debuted in Japan in Weekly Shonen Jump in 1999, quickly became the most popular ninja manga in the world. The series would also spawn multiple anime series, movies, novels, video games and more. Having concluded the series in late 2014, Masashi Kishimoto has kept himself busy this year with the side story, Naruto: The Seventh Hokage and the Scarlet Spring, and writing the story for the latest NARUTO movie, Boruto: Naruto the Movie, both of which focus on the title character's son, Boruto.