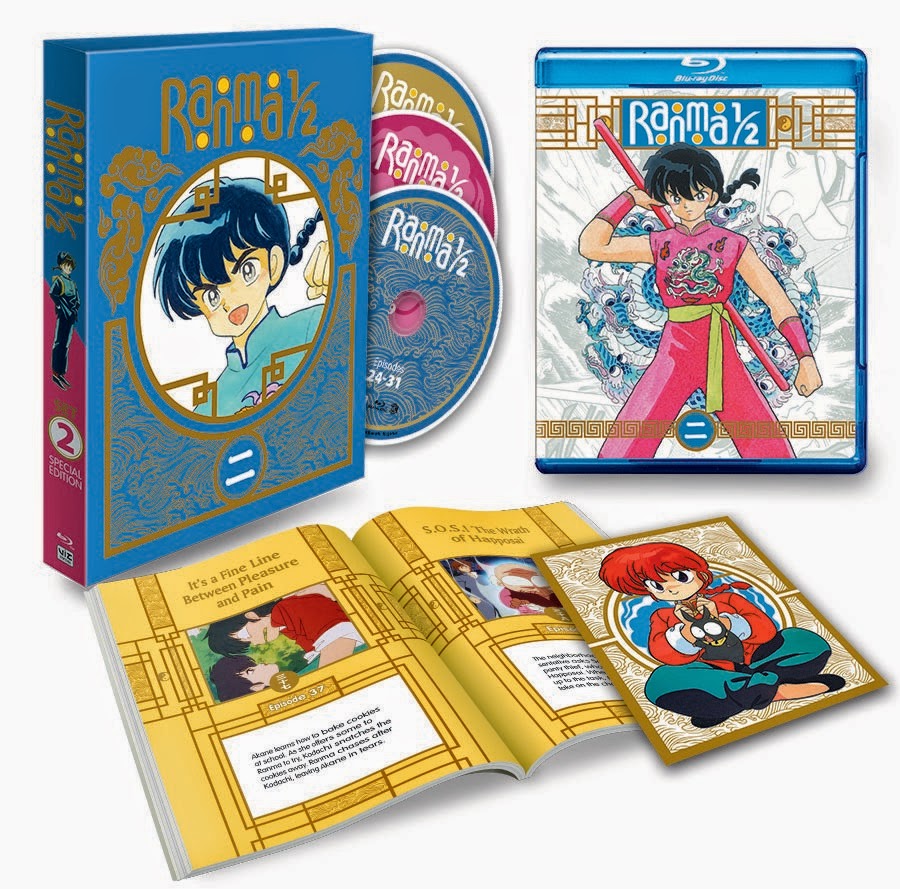 VIZ Media, LLC (VIZ Media), the largest distributor and licensor of anime and manga in North America, delivers the next installment of the celebrated return of the classic RANMA ½ anime series in new, digitally restored, High Definition Limited Edition Blu-ray and Standard Edition DVD Box Sets with the release of Volume 2 – covering Episodes 24-46 – on June 24th.

VIZ Media is releasing the revered gender-bending martial arts action comedy, based on the popular manga series created by Rumiko Takahashi, in its original Japanese series order across seven Limited Edition Blu-ray and DVD Box Sets. Each contains a wealth of special bonus features and other extras that fans will not want to miss. RANMA ½ is rated TV-14.

Guaranteed to become a highlight of any anime fan’s media collection,  the Limited Edition Blu-ray Box Set comes packaged in a premium chipboard box with gold foil stamping that is beautifully illustrated by Rumiko Takahashi and also includes a 32-page booklet, complete episode guide, and a collectable full-color RANMA ½ art card. Special bonus features available exclusively on the Blu-ray edition include, ’We love Ranma’ Part 2 – Favorite Scenes,’ the continuation of an ongoing series of insightful interviews tracing the legacy and impact of the groundbreaking anime show.

The RANMA ½ Standard Edition DVD set features 23 episodes presented in HD with the original, un-cropped 4:3 aspect ratio, and bonus features that include clean openings and endings and trailers.

Dialogue options for both DVD and Blu-ray formats include original Japanese with accurate English subtitles or dubbed English audio, along with a secondary subtitle track for signs and songs.

The latest RANMA ½ box set continues the zany adventures of Ranma Saotome, the boy who turns into a girl with a splash of water and always has his hands full fending off enthusiastic admirers! One of the most enthusiastic is Shampoo, the powerful Amazon from China who wants to kill the girl Ranma and marry the boy Ranma! And when she falls into a cursed spring and turns into a cat, the claws come out! But Shampoo has a suitor of her own, Mousse, who shows up one day and challenges Ranma to a battle over…Ranma’s fiancée, Akane? Then, Ranma’s dad, Genma, and Akane’s dad, Soun, studied under the same master, Happosai, who happens to be a bit of a perv. Surely there could be no connection between his sudden appearance and the disappearance of some neighborhood ladies’ undies!

RANMA ½ manga creator Rumiko Takahashi is one of Japan’s most prolific and respected manga artists and is the creator of several long running series including MAISON IKKOKU, RANMA ½, and INUYASHA – all published in North America by VIZ Media. The spotlight on her prolific career began in 1978 when she won an honorable mention in Shogakukan's annual New Comic Artist Contest for Those Selfish Aliens. Later that same year, her boy-meets-alien comedy series, Urusei Yatsura, was serialized in Weekly Shonen Sunday. This phenomenally successful manga series was adapted into anime format and also spawned a TV series and half a dozen theatrical-release movies, all incredibly popular. Takahashi followed up the success of her debut series with one blockbuster hit after another— MAISON IKKOKU ran from 1980 to 1987, RANMA ½ from 1987 to 1996, and INUYASHA from 1996 to 2008. Other notable works include MERMAID SAGA, RUMIC THEATER, ONE-POUND GOSPEL, and RIN-NE (all also published in North America by VIZ Media).