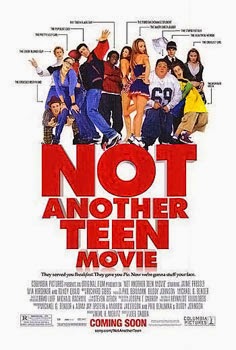 When a group of screenwriters is trying to write a movie script that parodies two decades of teen movies, the script could end up packed to the gills from too many film references, and that’s what happens to Not Another Teen Movie.  This flick is a parody of teen movies going back to John Hughes’s Pretty in Pink (1986), but it especially focuses its satirical eye on the wave of the teen films that were released in the second half of the 1990’s.

That was a time when teenagers had so much disposable income because of a booming economy, and the entertainment, food, and apparel industries did everything they could to offer as many product choices as possible to these affluent and relatively affluent teenagers; there certainly was no shortage of films geared towards these youngsters.

In fact the high school that is central to the plot of Not Another Teen Movie, John Hughes High School, is named after filmmaker John Hughes, who came to prominence in the 1980’s with such popular teen flicks as Sixteen Candles and The Breakfast Club (1985).  Not Another Teen Movie is a tale of high school melodrama and sexual shenanigans.  Jake Wyler (Chris Evans, who is also currently playing “Johnny Storm” in Fantastic Four), handsome senior, but disgraced former starting quarterback, takes a bet that he can turn a homely, nerdy girl into the prom queen.

His choice for the girl to transform is Janey Briggs (Chyler Leigh), a dirty poor, white trash girl, who (of course) is extraordinarily beautiful once she’s cleaned up, takes of her glasses, and loosens her hair out of a long ponytail.  They gradually fall for one another; now, Jake and Janey must travel from their inauspicious beginnings and go through 20 years of accumulated teen movie refuse in order to get to their teen movie happy ending.

Not Another Teen Movie parodies or references several John Hughes films and such teen classics as Fast Times at Ridgemont High (1982), The Goonies (1985), Can’t Hardly Wait (1998), She’s All That (1999), Varsity Blues (1999), plus Clueless, Never Been Kissed, Road Trip, and Ten Things I Hate About You.  Like 2003’s Scary Movie 3 (and the entire Scary Movie franchise, for that matter), Not Another Teen Movie is full of hilarious scenes sprinkled generously over a piss-poor plot and a dead screenplay.  Luckily some of the scenes are either super funny or so totally out of left field that they could blow minds: Chris Evans’ Jake Wyler singing Aerosmith’s “Janie’s Got a Gun;” Deon Richmond’s Malik, the token black guy running into Sean Patrick Thomas’ unnamed black guy at a party where Malik is supposed to be the only black guy there; and the prom night musical number that is actually sung by the cast.

Moviegoers who have seen at least one teen movie (whether they were a teen at the time or not) going back to Fast Times at Ridgemont High in 1982 will find something they recognize from that sub-genre of films that chronicle the wacky misadventures of high school students.  That makes Not Another Teen Movie a must-see in spite of its flaws.


Posted by Leroy Douresseaux at 6:41 AM