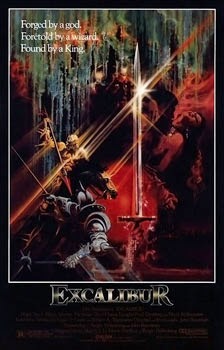 The subject of this movie review is Excalibur, a 1981 drama and fantasy film from producer-director John Boorman.  The film is mostly based on Le Morte d’Arthur, the 15th century Arthurian romance written by Thomas Malory.  Excalibur focuses on Merlin the magician, King Arthur, and Morgana Le Fey.  It depicts how Arthur unites a land, creates the Round Table, and builds Camelot, while forces conspire to destroy it all.

John Boorman’s Excalibur is the acclaimed director’s lushly filmed take on the Arthurian legend as adapted from Sir Thomas Malory’s Le Morte d’Arthur.  Early in the film, we see Arthur’s illicit conception when his father, King Uther Pendragon (Gabriel Byrne), use magical trickery to seduce, Igrayne (Katrine Boorman), another man’s wife, and impregnates her with the child that would become Arthur.  Later, Merlin (Nicol Williamson) claims the infant Arthur as the price Uther must pay Merlin for providing the magical disguise Arthur used to seduce Igrayne.

Later, young Arthur (Nigel Terry) pulls the sword of kings, Excalibur, from a stone, which makes him King Arthur.  The film tells the story of the rise of Arthur’s kingdom and the righteous birth of The Knights of the Round Table.  Then, things go bad when Arthur’s wife, Guenevere (Cherie Lunghi), takes Arthur’s best, bravest, and most favored knight, Lancelot (Nicholas Clay), as her lover.  Arthur’s sister, Morgana (Helen Mirren), a crafty sorceress, connives until the balance of power shifts from Merlin to her.  The film concludes with Arthur’s final battle, this against his son, Mordred (Robert Addie), whom Arthur fathered with Morgana.

Boorman, his screenwriting partner Rospo Pallenberg, cinematographer Alex Thomson (who earned an Oscar nomination for his work here), composer Trevor Jones, and costume designer Bob Ringwood (who earned a BAFTA Award nomination for his work in this film) came together to create an exquisite rendition of the tale of King Arthur and Camelot.  The film is full of Christian symbolism, in particularly dealing with Christianity supplanting the old gods and necromancy in favor of men.  There is also a lot of sexual subtext, much of it is surprisingly gay; there is lots of man love and admiration of the virility, honor, bravery, and skill of men.  Men really admire and love great men in this story, and women, for the most part, are trouble in this film.

Boorman wanted to emphasize the story over the characters in his take on the Arthurian myth, and he uses the stunning visuals to evoke feelings, but to also get the viewer to think about the things for which the stories of King Arthur and his kingdom stand.  However, the actors really don’t surrender and play the role of puppets.  They play up to the symbolism and imagery.  They don’t treat their roles as figurative, but as interpreters of the things that this myth teaches us about the better parts of human nature – humility, charity, bravery, and sacrifice, and an understanding to forgive the trespasses our friends, loved ones, countrymen, and fellow humans make against us and we against them.

In Excalibur, John Boorman composes his scenes and photographic shots as if each were a giant painting, a series of representational works meant to tell a powerful tale about universal ideals.  There is something grand in Excalibur, and in spite of its faults:  some poor dialogue, the tendency for the film to suddenly take big leaps forward in the narrative time, and Boorman’s assumption that we should be familiar with these characters and their motivations, it succeeds.