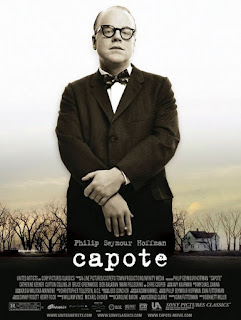 In November 1959, Truman Capote (Philip Seymour Hoffman) reads an article in The New York Times about the murder of the four members of the Clutters, a well-known farm family in Holcomb, Kansas. Something about the crimes catches Capote’s attention, and the acclaimed author believes that he can use this incident to prove his theory that non-fiction can be as compelling as fiction – in the hands of capable author, which he is. He convinces his editor at The New Yorker magazine to send him to Kansas, accompanied by his childhood friend, Nell Harper Lee (Catherine Keener), who was within a few months to publish the Pulitzer Prize winning novel that would make her famous, To Kill a Mockingbird

, as his assistant and researcher. Capote wants to write about how the Clutters’ murders affected Holcomb. With that as his focus, Capote initially doesn’t care if the murderers are ever caught.

However, when the two suspects, Perry Smith (Clifton Collins, Jr.) and Richard Hickock (Mark Pellegrino), are finally arrested, Capote becomes fascinated with Perry, and decides to expand the story to cover who Perry is and from where he came and what actually happened inside the house the night of the murders. Capote walks a thin line between befriending Perry and using him for what would become Capote’s most famous work, the book In Cold Blood

. The film focuses on his obsession with finishing the book, which meant that he desperately wanted Perry and his partner to be executed so that the book would have an end, and his compassion for his subjects, especially his deep feelings for Perry.

In Capote, Philip Seymour Hoffman gives the year’s best performance by an actor – male or female – by a mile. In addition, Capote is easily one of the ten best films 2005 that I’ve seen. Hoffman seems to channel the spirit of the late author, Truman Capote (1924-1984), and constructs a beautiful fictional version of the writer. He climbs so deep into the character that even a physical manifestation of the real Hoffman in the film are rare.

Beyond Hoffman’s brilliant and poignant performance, Capote, a fictionalized account of real events occurring from 1959 to 1965, is a superb film, extraordinary really. The team of director Bennett Miller and screenwriter Dan Futterman fashioned a film that allows Hoffman to be the center, but also makes room for a compelling, dramatic thriller that focuses on Capote’s self-interested friendship with two brutal murderers, but also includes Capote’s circle of friends. Catherine Keener makes the most of her part as Harper Lee, although the character exists only as an extension of Capote. If Capote the film has a shortcoming, it is that the script and performances create fully realized characters that are ultimately underutilized in the narrative. That is best exemplified in the film’s closing minutes when Keener’s Harper Lee coolly delivers a harsh judgment on Capote; that scene alone shows the potential of the movie if the it had given a more broad portrayal of the characters.

Still, Hoffman’s landmark performance carries the film past any shortcomings. He gives us a glimpse into the dark heart and cunning mind of an innovative artist who will say anything and use anyone to create his groundbreaking art. Capote is one of the best films in recent memory to deal with what a writer will do to get his story.

2006 Golden Globes: 1 win for actor in a motion picture-drama (Hoffman)