Review: Hughes Brothers Made a Documentary Classic with "American Pimp" 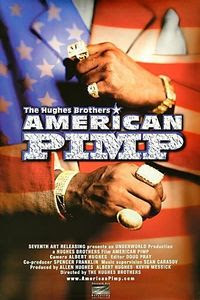 The Hughes brothers are perhaps the most politically incorrect African American filmmakers as seen in their work, Menace II Society and Dead Presidents. They solidify their positions as the infante terribles of “black cinema” with their documentary film, American Pimp. It’s about the pimps, men (mostly black men in this film) who sell the bodies of women to other men for sexual intercourse.

In this study of “pimpdom,” street pimps discuss their lives and work: getting started, influences, technique, their style, handling their ho’s (whores, prostitutes), making money, pimp philosophy or their personal philosophy. Listening to the pimps, the viewers might get the idea that the Hughes just let the pimps take control of the film. The brothers do allow them total freedom to express themselves, and that’s what makes the film so bracing. From one pimp after another, the viewer gets a wall of information dressed in slang, profanity, and politically incorrect speech. It’s like the Hughes gave them the ultimate freedom in which to sell themselves, their lives, and their ideology.

Still, the Hughes control the tone of this film. They use film footage to illustrate some myths about pimps and prostitution, and they include a lot of personal photographs from the “archives” of the pimps. The Hughes frequently reference blaxtiploitation films, and for many of the pimps, so-called black exploitation films are how-to-manuals for pimps, and for some, maybe the films merge to become some kind of holy text. The Hughes also use the camera to really give the viewer a sense of the environment of the pimps, or players, as they like to call themselves. Bringing in the pimps’ surroundings gives the film an ambience so that the movie is more than just talking heads.

This film will offend many viewers. It’s non-judgmental when it comes to the pimps, and the Hughes really allow the pimps to by hyper verbal, to speak their minds even in the foulest terms. The filmmakers don’t seek to judge them; they leave that to the audience. American Pimp is a document about how the pimps see themselves, not really about how others see them, although the film features many ho’s talking about pimps and, to a lesser extent, their own lives.

I really like this movie, and I’ve seen it several times. I didn’t think I’d like it. Sometimes I laugh, and sometimes I find some of the material to be pretty rank. However, I was kind of sad when it ended. I was really curious about a lot of these men’s futures. I think most people who really like documentaries will be fascinated and, maybe, repulsed by this, but I think American Pimp is a testament to the power of film to communicate everything from the broadest cultures to the smallest, ugly corners of human life, both of which have been with us forever. You might not like that this film exists because you think it “glorifies” pimps, but you can’t deny the blunt force of its story.