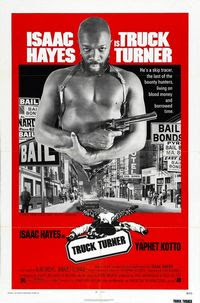 is one my best experiences with so-called blaxploitation films. The early Jonathan Kaplan (The Accused, in which he directed Jodie Foster to her first Oscar) directorial effort stars Isaac Hayes as Truck Turner. Turner is a bounty hunter who with his partner Jerry (Alan Weeks) is tracking a vicious and powerful pimp named Gator (Paul Harris). Turner kills Gator after an extended chase scene and huge shootout. Driven by revenge, Gator’s main squeeze, Dorinda (Nichelle Nichols), puts a hit out on Truck. After Truck easily dusts off the hit squad, Dorinda convinces Gator’s old rival and nemesis, Harvard Blue (Yaphet Kotto), to go after Truck in what turns out to be a bloody finale.

Kaplan directed a breezy and smoothly moving, violent action feature that would fit right in with current hyper-kinetic action flicks. Michael Kahn, who would go onto to be Steven Spielberg’s editor-of-choice and win three Oscars for editing Spielberg films, showed why he is so highly respected and graced with so many awards and nominations. Kahn’s editing created the sense of urgency, desperation, danger, and fear that was necessary to sell this particular kind of urban thriller. He actually raised the sense of looming disaster that hides around every corner in the urban setting.

The stars of this show, however, were the stars. Isaac Hayes gave a great performance as the kind of relentless and destructive protagonist that Arnold Schwarzenegger, Sylvester Stallone, Bruce Willis, and Harrison Ford would become so famous and so wealthy for playing. His Truck Turner is every bit the unstoppable force that the Arnold’s Terminator is. Hayes also provided the cool score for this film. Nichelle Nichols bold, foul-mouthed, Dorinda alone is worth the cost of admission, especially since we get to see her brick house form squeezed into her tight and sexy futuristic ho outfits. Yaphet Kotto is always a welcome sight, and he was so smooth and sensible that it’s almost a shame that Harvard Blue wasn’t the star.