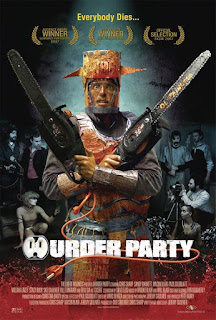 Murder Party is a 2007 American independent, comic-horror film from writer-director Jeremy Saulnier.  The film follows a man who follows the instructions on a random invitation to a gathering where the celebration is murder for the sake of art.

Christopher S. Hawley (Chris Sharp) is a lonely and plain New York City public employee.  On Halloween, he finds an odd-looking piece of paper being blown down the sidewalk by gusts of wind.  He opens it and sees that this is an invite to a “Murder Party,” which Christopher believes is a Halloween party.  He constructs a knight's costume out of cardboard and makes his way to a gritty part of Brooklyn where the “Murder Party” is being held.

What Chris discovers instead of a Halloween party is a trap set by a deranged and pretentious art collective, the members of which are dressed in Halloween costumes.  They intend to kill Christopher to impress a wealthy and sinister patron of the arts.  However, the members of this group are beset by petty feuds, rivalries, envy, incompetence, and lying, which makes them just as likely to murder each other as they are to hurt their captive/subject, Christopher.

Murder Party's production was apparently hamstrung by budget constraints, yet director Jeremy Saulnier produced a horror-comedy film that is more interesting than many of the horror or comedy films produced by major and mid-major Hollywood studios and production companies.  I have to admit that I only sought out this film after reading about Saulnier's most recent film (as of this writing), Green Room, which featured a much talked about performance by Patrick Stewart (of “Star Trek: The Next Generation” fame).  I consider finding an article about Green Room a stroke of luck, because it led me to this wonderful little film which is big in entertaining.

At times, I found myself mesmerized by Murder Party.  It is droll and witty, even when it is a bit heavy-handed in bashing artsy types.  I did not enjoy the last act as much as I enjoyed the rest of the film.  Murder Party is like the television series, “Big Brother” to me.  I like “Big Brother” when the cast remains large; as the cast shrinks, so does my interest in a particular season.  The characters in Murder Party are intriguing, although they largely remain unknown, and I started to miss them as they... went away.  Still, the last fight is a delightful bloodbath.

I heartily recommend Murder Party, and I look forward to more of Jeremy Saulnier's films.  Obviously, filmmakers need adequate budgets, but the imaginative and inventive directors find a way to shock, delight, and blow our minds even with a pitiful budget.