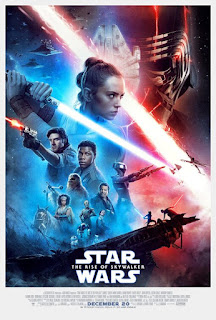 Star Wars: The Rise of Skywalker begins one year after the “Battle of Crait” (as seen in Star Wars: The Last Jedi).  Kylo Ren (Adam Driver) is now “Supreme Leader” of the First Order, and he is vexed by mysterious broadcasts that carry the voice of someone claiming to be “the Emperor.”  Determined to find this “phantom Emperor,” Kylo uses a Sith device called the “Wayfinder,” which leads him to a secret part of the galaxy and the planet, “Exegol.”

There, Kylo discovers a physically impaired Palpatine (Ian McDiarmid), the Emperor of the late Galactic Empire, long thought to be dead.  Palpatine reveals that he has been manipulating things behind the scenes, including luring Kylo to the Dark Side.  He wants Kylo to find Rey (Daisy Ridley) and to bring her to him.

Meanwhile, on the world the “Resistance” calls its home, Rey continues her Jedi training under the tutelage of General Leia Organa (archive footage of the late Carrie Fisher).  Thanks to a mole/spy in the First Order, the Resistance has learned of Kylo Ren's discovery.  Now, Rey, Finn (John Boyega), Poe Dameron (Oscar Isaac), Chewbacca (Joonas Suotamo), BB-8, and C-3PO (Anthony Daniels) leave on a mission to find a second Wayfinder, the one for which the late Luke Skywalker (Mark Hamill) had once searched, one that will lead them to Exegol.

Rey, Finn, and Poe will need the help of old heroes, like Lando Calrissian (Billy Dee Williams), and new friends, like Jannah (Naomi Ackie), if they are going to stop the forces of the Dark Side.  Kylo and Palpatine are plotting something called “the Final Order,” which includes a secret armada of the most powerful “Star Destroyers” ever assembled.

I think Star Wars: The Rise of Skywalker is the best Star Wars film since the end of the original Star Wars trilogy, Return of the Jedi, which was released in 1983.  I like everything about The Rise of Skywalker.  The directing, the writing, the CGI and the science and technology, the cinematography, editing, film score, costume design, art direction and set decoration, and, of course the acting.

Co-writer-director J.J. Abrams and co-writer Chris Terrio give us a satisfying resolution to the story arcs of both Rey and Kylo Ren.  Finn and Poe Dameron finally get quality screen time that allows the audience to see the best of their characters.  A number of actors who have appeared in Star Wars films over the last four decades-plus lend their voices to Star Wars: The Rise of Skywalker.  Lando Calrissian finally returns, with Billy Dee Williams making a star turn in each of his scenes.  Their are wonderful new characters (Keri Russell's Zorri Bliss) and the delightful return of familiar characters.

Star Wars: The Rise of Skywalker also offers the revival of old plots, and the film contains numerous references to important moments in previous films (including the execution of a feat of power displayed by Yoda in The Empire Strikes Back).  Even the last shot of the movie references an important moment in the original Star Wars film.

I love Star Wars: The Rise of Skywalker without reservation...  Well, maybe I think the movie is not long enough, because I could have watched another hour of it.  It is like a dark, but fantastic fairy tale, full of symbolism and magic.  So, you, dear reader, can take my sky-high recommendation with many proverbial grains of salt.  Star Wars: The Rise of Skywalker is my favorite movie of the year.  It is a fine end to the “Skywalker Saga”... or it is a satisfying goodbye until we see Rey, Finn, Poe, and our favorite Star Wars characters next time.

Posted by Leroy Douresseaux at 8:57 PM