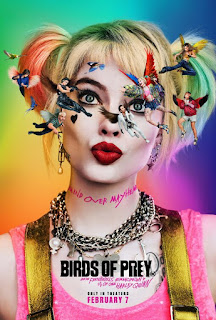 Birds of Prey (and the Fantabulous Emancipation of One Harley Quinn), or simply Birds of Prey, is a 2020 superhero fantasy film and crime comedy from director Cathy Yan.  The movie is based on several characters appearing in comic books published by DC Comics.  Birds of Prey focuses on a group of women who find common cause in their struggle against a violent crime boss.

Birds of Prey opens after the events depicted in the film, Suicide Squad (2016).  Psychiatrist turned crazed criminal, Dr. Harleen Quinzel a.k.a. Harley Quinn (Margot Robbie), has returned to Gotham City with her criminal accomplice and boyfriend, The Joker.  However, Joker breaks up with Harley and kicks her out of their house, so she moves into an apartment above a Chinese restaurant owned by a man named Doc (Dana Lee).

In Gotham City, Harley Quinn was virtually untouchable... because she was the Joker's girlfriend... which she isn't anymore.  Now, it's open season on Harley,  The man who most wants her dead is Roman Sionis (Ewan McGregor), a sadistic gangster who masquerades as a suave nightclub owner, but Harley earns a reprieve from Sionis.  He covets something called “the Bertinelli diamond,” which is currently in the possession of a young pickpocket named Cassandra Cain (Ella Jay Basco).

However, the quest for Cain and the diamond will force Harley to unite with three other women:  Dinah Lance a.k.a. “the Black Canary” (Jurnee Smollett-Bell), a burlesque singer who works for Roman; Renee Montoya (Rose Perez), a police detective in the GCPD; and Helena Bertinelli a.k.a. “the Huntress” (Mary Elizabeth Winstead), a vigilante that criminals call the “crossbow killer.”  Now, Harley and these women will show Gotham's underworld that it is the criminal class that should be afraid... of these birds of prey.

Birds of Prey's paper-thin plot:  retrieving a diamond; next, protecting a teen girl; and then, battling Roman Sionis, is not important.  This is a movie about “bad girls” having fun at the expense of really bad men, and Birds of Prey is quite good at that.  Director Cathy Yan makes the best of her ingredients:  a zany mix of actors, fantastic costumes, and eclectic sets and delivers an inspired, madcap movie of brutal, comic violence.  Birds of Prey is the kind of violent comedy that finds the wicked side of comic book stories and characters, the way the Deadpool films did.

Like the best comic books, Birds of Prey is over-the-top.  Why have a pet dog when you can have a pet hyena?  Why wear merely flashy costumes when you can wear the most fantabulous fashions?  Why hit an adversary when you can maim the mutha?  And what is a car chase without a chick on roller skates?  The women of Birds of Prey:  Margot Robbie, Rosie Perez, Mary Elizabeth Winstead, Jurnee Smollett-Bell, and Ella Jay Basco take their performances seriously without taking their roles too seriously.  Even Ewan McGregor adds just a touch of camp to his gleefully cruel creation, Roman Sionis.

I won't pretend that Birds of Prey is a great film, but it is the kind of inspired, R-rated comic book film that I wish we saw more.  And besides the soundtrack is pretty damn good.  So I am heartily recommending Birds of Prey (and the Fantabulous Emancipation of One Harley Quinn) to moviegoers who enjoy comic book films.