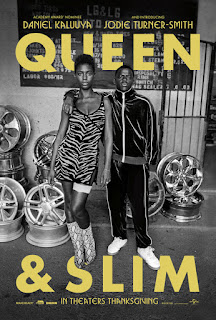 Queen & Slim is a 2019 American drama, road movie, and romance film from director Melina Matsoukas and screenwriter Lena Waithe.  The film follows an African-American couple whose first date turns into a race for their lives after a confrontation with a violent white police officer.

Queen & Slim introduces Queen (Jodie Turner-Smith), a criminal defense attorney, and Slim (Daniel Kaluuya).  After three weeks of asking, Slim finally convinces Queen to have dinner with him.  After eating at an Ohio diner, Slim is driving Queen home when his presumably erratic driving attracts the attention of a police officer.  The white police officer (Sturgill Simpson) not only pulls the two over, but also makes Slim step out of the car.

Agitated, the officer draws his gun on Slim and shoots and wounds Queen.  In an attempt to save their lives, Slim tackles the officer, before grabbing the cop's gun and shooting him to death in self-defense.  At the urging of Queen, the couple go on the run, headed for God knows where... but it is a journey of self-discovery and maybe even of finding love where there was none.

Queen & Slim offers three excellent performances, by Daniel Kaluuya and Jodie Turner-Smith in leads roles and by Bokeem Woodbine in a supporting role.  Kaluuya portrays Slim as a man who feels that what happens in his life has already been decided by fate.  Turner-Smith presents Queen as a woman who has a view of life that is not so much cynical as it is matter-of-fact.  She seems to believe that people, to some extent, can shape their own lives, rather than be subjected to fate.

As a couple, Queen and Slim don't fit, so what the actors present is the evolution of two characters that see the other side on the way to understanding one another.  There isn't really a magic moment, so much as there is an evolution – a kind of romantic journey of discovery.

On the other hand, as Queen's Uncle Earl, Bokeem Woodbine offers an eye-opening performance as a man who has found his kingdom inside, away from an outside that has no regard for him.  The last several years as seen Woodbine finally getting roles in larger and in more prestige projects, ones that both show off his star quality and his acting range.

Queen & Slim is also, in many ways, the creation of its writer Lena Waithe and director Melina Matsoukas.  Waithe's screenplay, based on a story Waithe concocted from James Frey's initial idea and story, offers more than just an “African-American take on the infamous killer couple, Bonnie Parker and Clyde Barrow.”  It is a love story in which two people are forced to first discover and then plum the depths of each other's individual humanity in a way that much of country would refuse to do for either of them.  That is why this movie is not a crime drama, although the impetus for Queen and Slim's journey involves a crime.  Waithe's screenplay is a road movie that is also a romance, showing the power of Black romantic love to survive even when a maelstrom surrounds it.

In Queen & Slim, Melina Matsoukas presents a film of striking visual power.  Via Tat Radcliffe's gorgeous cinematography and Pete Beaudreau's sultry editing, Matsoukas drinks in the environments – from waterways and countrysides to rundown urban places and the interiors of old house – and finds the aching, painfully beauty in everything that surrounds the characters.  Even the off-kilter moments, shot at odd angles, draw the reader into the story.

And in the end that is what makes Queen & Slim an exceptional film – the story.  What begins as a contemporary tale of the kind of strife that seems timeless and eternal in the history of America becomes a story that hatches and becomes whole in the end.  Waithe and Matsoukas dare to make something different and are different enough to be daring.  So Queen & Slim is one of the best films, not only in 2019, but also in recent memory, and perhaps it will eventually be one for the ages.