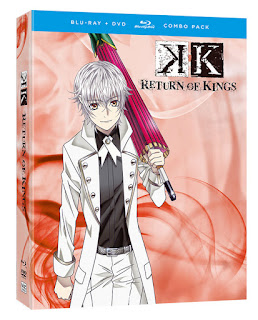 VIZ Media, LLC (VIZ Media), a premier company in the fields of publishing and animation distribution, delivers the exciting next season of the beautifully animated action thriller, K, with the home media release of K RETURN OF KINGS on July 18th, 2017.

The latest release presents the entire 13-episode second season of the acclaimed series and will be available to audiences as a Blu-ray/DVD Combo Pack and also as a Standard Edition DVD set. The series is rated ‘TV-14’.

Following the events of the feature film, K MISSING KINGS… The Green Clan JUNGLE has been spreading its influence, causing friction with the Red Clan HOMRA and the Blue Clan SCEPTER 4. The war escalates when the Green King, Nagare Hisui, sends his men to attack Kuro and Neko, forcing the return of the Silver King, Yashiro Isana. Reunited with his friends, Shiro reveals his plans for dealing with the Green Clan – an alliance of the Red, Blue and Silver Clans! But the Green King carries his own wild cards! Will the combined power of three kings be enough to stop Nagare Hisui from fulfilling his dark ambitions?

The K RETURN OF KINGS Blu-ray/DVD Combo Pack features full 1080p HD resolution and 16x9 video and will carry an MSRP of $69.99 U.S. / $81.99 CAN. Notable bonus features exclusive to the Blu-ray edition include clean opening and closing segments and a special Episode 13 Director’s Cut and a set of 13 full-color character art cards.

The Standard edition DVD set will be offered with an MSRP of $39.99 U.S. / $52.99 CAN. Bonus features for the DVD edition include clean opening and closing segments.

“The gripping saga of an ordinary teenager that becomes embroiled in a deadly ongoing conflict between several clans continues in the exciting second season of K and audiences will not want to miss a single episode,” says Charlene Ingram, Director of Animation Marketing. “The dynamic mix of action, psychological drama, gorgeous animation and intriguing, multi-layered characters has made K a favorite series among anime fans and we look forward to audiences diving into this latest release!”

For more information on K or other award-winning anime titles from VIZ Media, please visit VIZ.com.