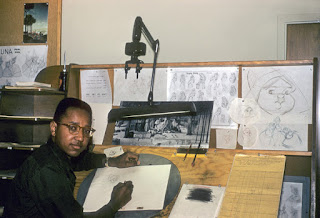 CHICAGO--(BUSINESS WIRE)--SIGGRAPH 2017, the world’s leading annual interdisciplinary educational experience showcasing the latest in computer graphics and interactive techniques, proudly announces Floyd Norman, the first African-American animator to work for Walt Disney Animation Studios, as its keynote speaker. SIGGRAPH’s keynote session featuring Norman will be presented as a fireside chat, allowing attendees the opportunity to hear a Disney legend discuss his life and career within an intimate setting. SIGGRAPH 2017 will mark the 44th International Conference and Exhibition on Computer Graphics and Interactive Techniques, and will be held July 30th to August 3rd, 2017 in Los Angeles.

The #SIGGRAPH2017 Keynote has been announced! Learn all about @floydnorman. #CG #animation (cc: @siggraph)

Floyd Norman was the subject of a 2016 documentary film entitled “Floyd Norman: An Animated Life” from filmmakers Michael Fiore and Erik Sharkey. The film, which covers Norman’s life story, also includes interviews with such notables as actress/comedian Whoopi Goldberg (voice, “The Lion King”), Richard Sherman (composer, “Mary Poppins”) Leonard Maltin (film critic), Ralph Guggenheim (former vice president of animation at Pixar) and Gary Trousdale (co-director, Disney’s “Beauty and the Beast”), among others. Ain’t It Cool News hailed the film “delightful” and said, “[Norman is] a man who has undoubtedly brought joy to your life without you even knowing it.”

“Floyd Norman is a living legend and a national treasure. He is an animator, storyteller, and renowned artist. As the first African-American animator to work at Walt Disney [Animation Studios], Norman is an inspiration to those of us who followed his trail-blazed path into the animation, motion graphics, and computer graphics fields. We are thrilled that he has accepted our invitation to appear as our very special keynote speaker for SIGGRAPH 2017,” said SIGGRAPH 2017 Conference Chair Jerome Solomon.

Norman was hired as the first African-American animator at Walt Disney Studios in 1956 and was later hand-picked by Walt Disney himself to join the story team on “The Jungle Book.” After Walt’s death, Norman left Disney to start his own company, Vignette Films, Inc., and produce films on the subject of black history for high schools. He and his partners would later work with Hanna-Barbera Productions to animate the original Fat Albert TV special “Hey, Hey, Hey, It’s Fat Albert,” as well as the opening title sequence for the TV series “Soul Train.”

Norman returned to Disney in the 1980s to work in their publishing department, and in 1998 moved to the story department to work on “Mulan.” After all this, an invite to the Bay Area in the late ‘90s became a career highlight when Norman began working with leaders in the next wave of animation — Pixar and Steve Jobs — adding “Toy Story 2” and “Monsters, Inc.” to his film credits. Though Norman technically retired at the age of 65 in 2000, Norman is not one to quit and chose, instead, to occupy an open cubicle at Disney Publishing Worldwide for the last 15 years. As he puts it, “I just won’t leave.”

While not on staff, Norman’s proximity to other Disney personnel has led him to pick up freelance work, and continue his impact on animation as both an artist and a mentor. As to his future plans, he says, “I plan to die at the drawing board!”

On SIGGRAPH, Norman shared, "I’ve been fascinated by computer graphics since I purchased my first computer. I began attending SIGGRAPH when a kiosk was all Pixar could afford. Since then, I’ve had the pleasure of working for this fine company and being a part of this amazing technology as it continues to mature. I’ve also enjoyed sharing insights I’ve garnered over the years in this fantastic industry. In recent years, I’ve spoken at several universities and even Apple. Creative imagination and technological innovation have always been a part of my life, and I’m delighted to share my enthusiasm with the fans at SIGGRAPH this year.”

Registration for SIGGRAPH 2017 is now open. Visit the conference website for more information.


About SIGGRAPH 2017
The annual SIGGRAPH conference is a five-day interdisciplinary educational experience in the latest computer graphics and interactive techniques, including a three-day commercial exhibition that attracts hundreds of companies from around the world. The conference also hosts the international SIGGRAPH Computer Animation Festival, showcasing works from the world's most innovative and accomplished digital film and video creators. Juried and curated content includes outstanding achievements in time-based art, scientific visualization, visual effects, real-time graphics, and narrative shorts. SIGGRAPH 2017 will take place from 30 July–3 August 2017 in Los Angeles. Visit the SIGGRAPH 2017 website or follow SIGGRAPH on Facebook, Twitter, YouTube, or Instagram for more detailed information.

About ACM SIGGRAPH
The ACM Special Interest Group on Computer Graphics and Interactive Techniques is an interdisciplinary community interested in research, technology, and applications in computer graphics and interactive techniques. Members include researchers, developers, and users from the technical, academic, business, and art communities. ACM SIGGRAPH enriches the computer graphics and interactive techniques community year-round through its conferences, global network of professional and student chapters, publications, and educational activities.

About ACM
ACM, the Association for Computing Machinery, is the world's largest educational and scientific computing society, uniting educators, researchers, and professionals to inspire dialogue, share resources, and address the field's challenges. ACM strengthens the computing profession's collective voice through strong leadership, promotion of the highest standards, and recognition of technical excellence. ACM supports the professional growth of its members by providing opportunities for lifelong learning, career development, and professional networking.

Posted by Leroy Douresseaux at 3:19 AM