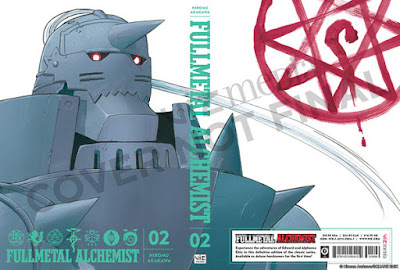 Set for publication beginning in early 2018, the new manga titles include FIRE PUNCH, a dystopian thriller that will launch under the VIZ Signature imprint, and the gender-swapping shojo manga series KENKA BANCHO OTOME: GIRL BEATS BOYS. Manga additions also include the classic bestselling series FULLMETAL ALCHEMIST, which returns in a hardcover collector’s edition. SISYPHEAN was announced as the latest novel to join the Haikasoru literary imprint, and a pair of titles—a haiku volume and an activity book—inspired by the global hit mobile game Neko Atsume: Kitty Collector also join the VIZ Media roster.

In the not-too-distant past, the Ice Witch blanketed the world in snow, starvation and madness, leading the inhabitants to seek their salvation in fire. With that, an unusual destiny unfolds for two young orphans, Agni and Luna, blessed with the ability to regenerate. But will this ability prove to be more of a curse than a blessing? FIRE PUNCH was a nominee for the 2017 Manga Taisho Award.

In this award-winning novel by Dempow Torishima, even after the world and humanity itself have been rendered nearly unrecognizable by genetic engineering, a day in the office can feel…Sisyphean. The company stands atop a tiny deck supported by huge iron columns a hundred meters high. The boss there is its president – a large creature of unstable, shifting form once called “human.” The world of his dedicated worker contains only the deck and the sea of mud surrounding it, and the worker’s daily routine is anything but peaceful. A mosaic novel of extreme science and high weirdness, Sisyphean will change the way you see existence itself. Sisyphean was a winner of the prestigious Japan SF Award and also nominated for a Seiun Award.

Expand your play from the popular mobile game Neko Atsume: Kitty Collector with a fun activity book for cat fans of all ages. In this full-color book, seek and find favorite kitties from Neko Atsume Kitty Collector as they romp through imaginative new environments, learn facts about the classic cats and play with dozens of stickers!

Ever wonder what the kitties of the popular mobile game Neko Atsume: Kitty Collector get up to when they're not on your screen? Join the cast of the cartoon cats of Neko Atsume Kitty Collector in an irreverent journey through the seasons as told in haiku.

Fully remastered with an updated translation and completely fresh lettering, and presented with all the original color pages on large-trim archival-quality paper, this gorgeous hardcover edition presents the timeless dark adventures of the Elric brothers as they were truly meant to be seen. Also includes new behind-the-scenes character sketches and brand-new color art from author Hiromu Arakawa

A captivating new manga series based on the Japanese romantic adventure game, Kenka Bancho Otome. Hinako thought she didn't have any family, but on the day she starts high school, Hinako’s twin brother Hikaru suddenly appears and tricks her into taking his place. But the new school Hinako attends in his stead is beyond unusual. Now she must fight her way to the top of Shishiku Academy, an all-boys school of delinquents!

For additional information on other manga and literary titles distributed and published by VIZ Media, please visit VIZ.com.