Free "Pepe the Frog" from Klan Bitches and Alt-Racists 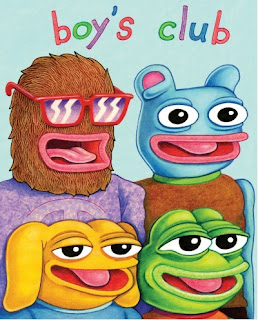 The Truth About Pepe the Frog

SEATTLE, WA—Fantagraphics Books and Matt Furie, the creator of the eternally chill comic book character Pepe the Frog, condemn the illegal and repulsive appropriations of the character by racist fringe groups linked to the alt-right movement and the Donald Trump presidential campaign. Furie’s character has been categorized as a hate symbol by the Anti-Defamation League as a result of these uses, creating significant emotional and financial harm for the creator.

Most media reports now routinely default to a narrow description of Pepe as a representation of white supremacy, ignoring the mellow, positive-vibed frog that he is in the hands of his creator, Matt Furie, within the pages of Furie’s Boy’s Club comics (as collected by Fantagraphics Books). Yet the myriad copyright violations of recent weeks have resulted in Furie’s name now turning up in Anti-Defamation League database search results.

Having your creation appropriated without consent is never something an artist wants to suffer, but having it done in the service of such repellent hatred — and thereby dragging your name into the conversation, as well — makes it considerably more troubling.

Fantagraphics Books wants to state for the record that the one, true Pepe the frog, as created by the human being and artist Matt Furie, is a peaceful cartoon amphibian who represents love, acceptance, and fun. (And getting stoned.) Both creator and creation reject the nihilism fueling Pepe’s alt-right appropriators, and all of us at Fantagraphics encourage you to help us reclaim Pepe as a symbol of positivity and togetherness, and to stand by Matt Furie.

We encourage reporters and others citing Furie as the character’s creator to also note that he condemns these illegal representations of his character. Matt is available for interviews through Fantagraphics. We encourage fans and others who support Furie to block, report, and denounce the illegal uses of the character by individuals and groups pirating him to foment hatred.