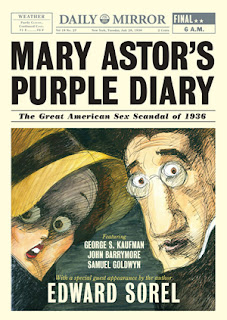 [This review originally appeared in Patreon.]

Lucile Vasconcellos Langhanke a.k.a. Mary Astor (1906 – 1987) was an American actress whose career spanned the silent film era of Hollywood through its “Golden Age” and into the end of Hollywood's “studio system.”  Her two most famous films were released in the year 1941.  She won the“Academy Award for Best Supporting Actress” for her performance in The Great Lie.  Astor is probably best remembered for her role as “Brigid O'Shaughnessy” in The Maltese Falcon, directed by John Huston and starring Humphrey Bogart and also released in 1941.

Born in 1929, Edward Sorel is an illustrator, caricaturist, cartoonist, and graphic designer.  His work is known for its leftist and liberal social commentary and its criticism of reactionary right-wing politics and organized religion.  As a cartoonist and caricaturist, Sorel once regularly contributed to magazines such The Nation, New York Magazine and The Atlantic, and of late, Vanity Fair.

Sorel is also known for his work as a writer-illustrator who tells stories through his prose that is accompanied by his illustrations (which are done in his wavy pen-and-ink style).  An example of Sorel's illustrated storytelling is his new book, Mary Astor's Purple Diary (subtitled, The Great American Sex Scandal of 1936).   How did such a book come to be?

In 1965, Sorel was a struggling young artist recently beginning his second marriage and living in a $98 a month apartment on the Upper East Side of New York City.  His new wife, Nancy, demanded that he pull up the linoleum of the kitchen floor in the apartment.  Under layers of rotting linoleum, Sorel discovered a bunch of New York newspapers from the year 1936.  It was the New York Daily News and New York Daily Mirror.  The front pages of these newspapers concerned a lurid Hollywood sex scandal surrounding the divorce and custody trial fought by Mary Astor and her then (second) husband, Franklyn Thorpe.  At the center of this scandal was Mary Astor's diary in which she chronicled her sexual conquests, and Thorpe had found it!

Ed Sorel's newspaper find led to a life-long obsession with Mary Astor.  Drawing on film history and a deep love for the cinema, Sorel tells the story of Mary Astor... and of her “purple diary.”

I am familiar with Sorel's work, but I did not follow him the way I did other magazine and newspaper cartoonists and caricaturists, such as my beloved Charles Addams.  I know Mary Astor's name, but that is related to her role in one of my all-time favorite movies, The Maltese Falcon, which I think is one of the best American films ever made.

Still, I found Mary Astor's Purple Diary to be a fascinating read.  Frankly, I read it quickly in big chunks.  Sorel is a riveting storyteller, who populates his prose with striking illustrations that caricature the people and the time of Astor's diary scandal.  Honestly, I cannot say that I am particularly interested in Astor's scandal, but I am drawn to the way Edward Sorel tells it.

Obviously, Astor's custody battle with her second husband riveted audiences during the Great Depression.  However, for a sex scandal to live again or to be reborn decades later, it needs a storyteller who can get the best story out of history, which Sorel does.  It does not matter if you do not know Sorel's work or Mary Astor's films, although I recommend The Maltese Falcon.  If you are looking for a damn good read, it is Mary Astor's Purple Diary.

Posted by Leroy Douresseaux at 4:15 PM