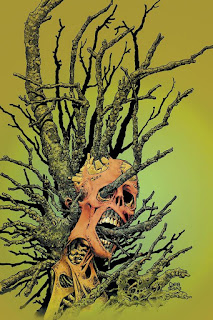 MILWAUKIE, Ore.—The master of horror returns to Dark Horse! For nearly fifty years, Richard Corben (Rat God, Ragemoor, Creepy, Eerie) has been terrifying readers with his unique visions of the macabre and the horrific. On December 14, 2016, the Eisner Hall of Famer launches his newest nightmarishly beautiful series: Shadows on the Grave.

Shadows on the Grave is an eight-issue mini anthology of bizarre horror stories told in Corben’s signature black-and-white style. Each issue of Shadows on the Grave features four tales of horror, including the ongoing saga of Denaeus, a Greco-Roman-era version of Corben’s Den from Heavy Metal.

Praise for Corben’s past works:

“He is the mainstay in my collection of original art and one of the most precise and admirable storytellers in the medium.”—Guillermo del Toro

“Corben has been an artist’s artist for longer than some of us have been alive, and Rat God #1 illustrates that he is still working at the peak of his weird powers, delivering a true-to-form Lovecraftian set-up, wrapped in gorgeous, rock album ready artwork.”—Newsarama