Review: "Captain America: Civil War" Could Be the Best Superhero Movie Ever 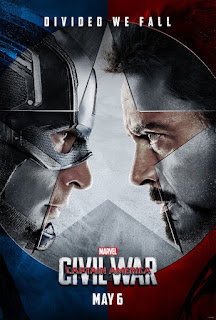 Captain America: Civil War is a 2016 superhero film from Marvel Studios and is directed by Anthony Russo and Joe Russo.  The film stars Marvel Comics character, Captain America.  It is a direct sequel to the 2014 film, Captain America: The Winter Soldier (which was also directed by the Russo Brothers), and is also a follow-up to 2015’s Avengers: Age of Ultron.  Civil War the movie finds the Avengers suddenly having to contend with political interference in the their activities, which causes a rift between teammates, Captain America and Iron Man.

In the aftermath, U.S. Secretary of State Thaddeus Ross (William Hurt) informs the Avengers that the United Nations wants to oversee and control the Avengers in the wake of the events of New York City (as seen in Marvel's The Avengers), Washington D.C. (depicted in Captain America: The Winter Soldier) and in the nation of Sokovia (shown in Avengers: Age of Ultron), as well as in Lagos.  The United Nations is preparing to pass the “Sokovia Accords,” which will establish a UN panel to decide if and when the Avengers can go into action.  Tony Stark/Iron Man (Robert Downey, Jr.) supports the accords, but Steve Rogers does not.

That divides the team and pits Avengers who agree with Stark (“team” Iron Man) against the Avengers who support Rogers position (“team” Captain America).  Soon the Avengers are fighting one another, which draws in new costumed superheroes.  Meanwhile, a sinister, yet unseen force plots to take advantage of the Avengers' “civil war.”

I am not one of those people who believes that a movie is ruined for them if they read or hear “spoilers” about the contents of the movie.  Before I saw the original Star Wars film, I had read the official novelization of the movie countless times, and I do mean countless.  I was reading the thing about four or five times a year.  When I finally saw Star Wars (two years after first seeing The Empire Strikes Back, I felt like I had experienced the story for the first time, although I had a fairly good idea about the film's course of events.

However, I assiduously avoided finding out what happened in Captain America: Civil War.  That may be why I love the movie so much; every shocking reveal was indeed surprising to me.  A day after seeing Civil War (as I write this review), I still cannot believe that I liked it so much.  Here goes...

Most of all, the characters have engaging, cool, and even alluring personalities and personal stories.  Whether it is Steve Rogers' man-out-of-time tale or Tony Stark's duel between his out-sized ego and his desire to be the man who uplifts the human race, Marvel characters work on a personal level.  Steve Rogers and Tony Stark are just as amazing in or out of their costumes.

Captain America: Civil War is not only good because it has a riveting plot and narrative.  It is also good because Marvel Comics characters are simply great characters.  With each Marvel Studios movie or movie featuring Marvel characters produced by other studios, the world is discovering what comic book fans already know.  Go see Captain America: Civil War.  It will probably end up being better than 90 percent of the films that receive Oscar nominations this year.