Review: "THE SWORD OF DOOM" is a Thrilling Jidaigeki 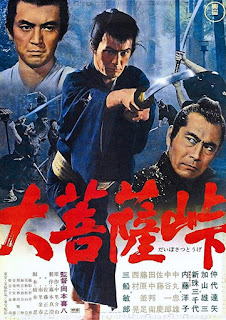 Dai-bosatsu Tōge (The Pass of the Great Buddha) is a 1966 Japanese period drama (a “jidaigeki”).  Also known by the titled, The Sword of Doom (the title by which I will refer to this film for this review), the film is directed by Kihachi Okamoto from a screenplay by Shinobu Hashimoto and is based on a novel written by Kaizan Nakazato.  The Sword of Doom focuses on a sociopathic samurai who relishes killing people.

The Sword of Doom introduces Ryunosuke Tsukue (Tatsuya Nakadai), a master swordsman with an unorthodox fighting style.  Amoral and ruthless, Ryunosuke believes that one's sword is one's soul.  We see him kill an elderly pilgrim; needlessly kill a man in a duel; and kill several of that man's clansman who ambush him shortly afterwards.

To make a living, Ryunosuke joins the “Shincho Group,” a rogue band of ronin who take it upon themselves to murder and assassinate for whatever reason they decide.  However, the wanton murders and other unconscionable acts he has committed have created a trail of vendettas that follows Ryunosuke closely.  He has also drawn the notice of two people in particular:  a young man, Hyoma Utsugi (Yuzo Kayama), whose brother Ryunosuke killed, and Shimada Toranosuke (Toshiro Mifune), another master swordsman, whose skill unnerves Ryunosuke.

First, I feel obligated to give you a warning, dear readers.  The Sword of Doom ends abruptly during the middle of a fight between Ryunosuke and dozens of assassins in a burning courtesan house.  It leaves many plot elements and subplots unresolved, including those involving Hyoma Utsugi and Shimada Toranosuke.  Apparently, Kihachi Okamoto, the director of The Sword of Doom, planned to adapt the novel upon which the film is based as a trilogy, but the other films were never made.

That said,  I think that The Sword of Doom is a tremendous samurai film, and, while I have not seen that many samurai films, it is one of the best I have ever seen.  There are three things that draw me to this movie.  First, I like the way the film focuses on Ryunosuke.  It is as if Okamoto points his camera through Ryunosuke's flesh and blood and into his soul.  This film is an examination of an amoral man's interior life; it is an investigation of how such a man lives with and justifies himself.  While Ryunosuke may act as if he does not care about anyone, as the film goes on, he clearly cannot deal with a reckoning – odd for a man who acts as if he is above it all.

The second element that makes me really like this film are the sword duels and group battles.  The battle between Ryunosuke and his victim's clansman at the end of the Spring 1860 segment is bracing, while the duel that initiates this battle is a feast of anticipation.  The fight at the end of the film is just crazy, mad, and crazy-mad-good; seeing Ryunosuke hack, slash, and stab so many of the men trying to kill him made me fell almost delirious or almost sick.  However, I think the best fight in this movie involves the character played by one of my favorite actors.

The late Toshiro Mifune could have made a toilet paper commercial exciting filmed entertainment.  His mere presence in The Sword of Doom elevates the film.  It is as if Mifune first appears in this film to let the viewer know that this movie has a higher purpose than being just another jidaigeki.  When Mifune's Toranosuke kills the perpetrators of a botched assassination attempt, he defines this movie as both a rumination on the evil actions of an evil man and as a tale about the kind of bold men who must fight powerful evil men.