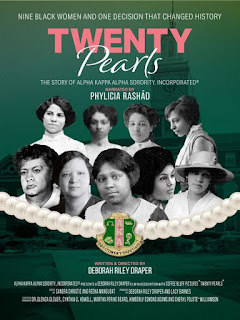 PHILADELPHIA--(BUSINESS WIRE)--Comcast NBCUniversal is excited to announce the exclusive premiere of the documentary film Twenty Pearls: The Story of Alpha Kappa Alpha Sorority, Incorporated®, Friday, March 26, 2021 on its newly-launched Black Experience on Xfinity Channel, available on X1, Flex, and on-the-go with the Xfinity Stream app.

From award-winning filmmaker Deborah Riley Draper, produced by Coffee Bluff Pictures, and narrated by Phylicia Rashād, Twenty Pearls closely examines the founding and legacy of the first Black sorority, Alpha Kappa Alpha Sorority, Incorporated®, which is now regarded as one of the most significant and influential Black organizations in history. The documentary tells a powerful story of sisterhood. In 1908, nine Black women enrolled at Howard University made one decision that would change the course of history. These college students created Alpha Kappa Alpha Sorority, Incorporated®. For over 113 years, the sorority has influenced many of the most famous watershed moments in history.

“This is an extraordinary time to look back at our past to serve our future,” said filmmaker Deborah Riley Draper. “A future where Black women are centered. Helming this documentary love letter to the founders of Alpha Kappa Alpha, the generations of women that followed in their footsteps and to all Black women everywhere is an honor. This is an important history for all of us to know and understand.”

“Telling our own story is essential to preserving our history and uplifting the culture,” said Alpha Kappa Alpha International President and CEO Dr. Glenda Glover. “Alpha Kappa Alpha Sorority, Incorporated’s remarkable 113-year journey which began on the campus of Howard University is punctuated by stories of history makers, ceiling breakers, public servants and ordinary women who have changed the course of American history. Through this beautifully written and narrated odyssey, this film highlights in undeniable ways the vision, courage, tenacity, determination and power of Black women while putting to bed the age-old questions about the relevance of Historically Black Colleges and Universities and the Divine Nine sororities and fraternities.”

Black Experience on Xfinity is a first-of-its-kind destination of Black entertainment, movies, TV shows, news and more. It features high-quality content from many of Xfinity’s existing network partners, at no additional cost, while investing millions of dollars in fostering and showcasing emerging Black content creators. The channel is the only one of its kind endorsed by the African American Film Critics Association (AAFCA), the world's largest group of Black film critics that gives annual awards for excellence in film and television. Available at home on Xfinity X1 and Flex, and on-the-go with the Xfinity Stream app, the Black Experience on Xfinity will entertain, educate and uplift, featuring Black actors, writers, producers and directors. At home, Xfinity subscribers can visit channel 1622 or simply say “Black Experience” into the Voice Remote to instantly enjoy the ultimate in Black storytelling.

Visit https://www.xfinity.com/learn/digital-cable-tv/black-experience to learn more about the Black Experience on Xfinity and other Black programming available on X1, Flex, and the Xfinity Stream app. Visit www.aka1908.com to learn more about Twenty Pearls, which premiered on March 26 on Xfinity and is free for subscribers, and will be available nationwide, on demand, starting on March 30, 2021.

About Alpha Kappa Alpha (AKA) Sorority, Incorporated®:
Alpha Kappa Alpha Sorority, Incorporated® began as the vision of nine African-American college students on the campus of Howard University in 1908. Since then, the sorority has flourished into a globally-impactful organization of more than 300,000 college-educated members bound by the bonds of sisterhood and empowered by a commitment to service that is both domestic and international in scope. As Alpha Kappa Alpha has grown, it has maintained its focus in two key areas: lifelong personal and professional development of its members and galvanizing its membership into an organization of respected power and influence which is consistently at the forefront of advocacy and social change that results in equality and equity for all citizens of the world.

Posted by Leroy Douresseaux at 10:33 AM