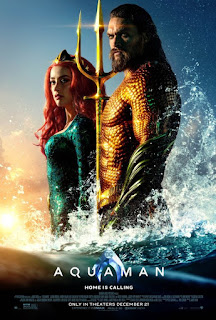 Aquaman is a 2018 superhero science fiction and fantasy film from director James Wan.  It is the sixth film in the DC Extended Universe (DCEU), which is comprised of films based upon DC Comics characters.  Aquaman was created by artist Paul Norris and editor Mort Weisinger and first appeared in More Fun Comics #73 (cover dated: November 1941).  Aquaman the film focuses on a half-breed who is heir to the throne of an underwater kingdom and his quest to prevent an all-out war between the worlds of the land and the seas.

Aquaman opens in 1985.  Thomas Curry (Temuera Morrison), a lighthouse keeper in Amnesty Bay, Maine, rescues Atlanna (Nicole Kidman), the queen of the underwater kingdom of Atlantis, during a storm.  They fall in love and have a son named Arthur, who has the power to communicate with sea creatures.  Eventually, however, Atlantean soldiers arrive to retrieve Atlanna, who had fled her arranged marriage in Atlantis.

The film movies to the present day, several months after the events depicted in the film, Justice League.  Arthur Curry (Jason Momoa), now also known as the “Aquaman,” attempts to live a normal life in Amnesty Bay, but his Atlantean heritage is about to intrude on his life.  Arthur has a half-brother, Orm Marius (Patrick Wilson), who is the current King of Atlantis and who is also the second son of Atlanna.  Orm is attempting to rally the undersea kingdoms to his cause.  He wants to unite and to attack the surface world for polluting the oceans.  Princess Y'Mera Xebella Challa, also known simply as Mera (Amber Heard), is betrothed to Orm, but refuses to aid him or her father, King Nerius of Xebel (Dolph Lundgren), in their plans.

Mera travels to the surface where she meets Arthur and tries to convince him to help her in stopping Orm.  She also wants Arthur to take his rightful place as King of Atlantis.  Before he does that, however, Arthur must recover a magic artifact, the lost “Sacred Trident of Atlan,” which will mark its possessor as the rightful ruler of Atlantis.  The problem is that Arthur does not want to be King of Atlantis nor anywhere else for that matter.

Watching Aquaman, I could not help but notice that many of its story points and plot elements were glaringly similar to that of Marvel Studios' Black Panther, which debuted earlier in the same year that Aquaman hit theaters, 2018.  Whereas Black Panther was edgy, philosophically in tune with Pan-Africanism, and socially relevant, Aquaman is simply a grand, old-fashioned, action-adventure fantasy film, and there is nothing wrong with that.  Aquaman is solidly entertaining.

If Aquaman must be accused of copying other films, in terms of visual concepts and world-building, Aquaman leans heavily on the Star Wars prequel films and on Tron: Legacy.  And once again, there is nothing wrong with that.  Many big-budget, tent-pole films borrow from other movies of similar to its type.  Aquaman dazzles the eyes and blows the mind.  It is such a spectacular visual effects feast for the eyes, senses, and imagination that I am surprised that it did not get any Oscar nominations in the categories of visual effects, art direction-set decoration, and costume design.  That such a visually resplendent film did not get in Oscar nominations says something about the nominating process of the Academy Awards in many areas.

I must admit that I think that this film does have a few sizable problems.  Aquaman's stiff, overly-formal, highfalutin' dialogue hampers the acting, which isn't all that good to begin with.  The character writing is also average, so it is not as if the actors have much to work with in building strong dramatic characters.  Still, I'd have to be feeling generous to say that Jason Momoa was more than average as Arthur Curry/Aquaman, although he does appear to be trying hard.  Patrick Wilson and Yahya Abdul-Mateen II overact and ham-it-up as Orm and Black Manta, respectively.  Willem Dafoe is practically a wooden idol as Vulko, and Amber Heard seems to think that she is playing Mera in a spoof of a superhero movie rather than acting in a “serious” superhero film.

I would normally give a film with such average character drama on the part of the screenplay and such awkward acting a grade of “B.”  The directing by James Wan is strong enough, however, and, once again, the film is such a visual effects orgasm that I will bump up Aquaman's final grade a little.