Review: "SON OF SAUL" is Powerful and Unforgettable 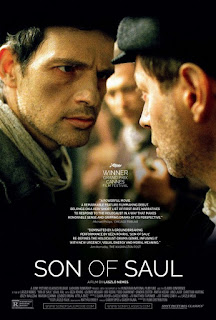 Son of Saul or Saul fia (original title) is a 2015 Hungarian historical drama from director Laszlo Nemes.  The film is set in a concentration camp and focuses on a prisoner who tries to save his son's body from the crematorium.  The film won the Oscar for “Best Foreign Language Film of 2015.”

Son of Saul opens in the Nazi extermination camp, Auschwitz, in October 1944.  Jewish-Hungarian prisoner, Saul Ausländer (Geza Rorig), is a member of Sonderkommando.  This unit is made of Jewish prisoners who herd other Jews into the showers where they will be gassed to death.  Afterwards, Saul and the other Sonderkommando remove valuables from the clothes of the dead, drag the dead from the gas chambers to the crematoria so they can be burned, and finally clean the killing floors.

Saul carries out his dreadful task with a stoic and impassive expression upon his face.  One day, however, Saul recognizes a boy removed from the gas chambers.  He believes the boy is his son, so he begins a desperate, furtive campaign to save his son's body from the flames of the crematoria.

I have seen many films and television programs that are partially set in concentration camps and films that directly or indirectly concern the Holocaust.  I think that Son of Saul is only one of a few films that I have seen that are set entirely or almost entirely in a Nazi extermination camps.  The most obvious example is the Oscar-winning Schindler's List, which was directed by Steven Spielberg.  In some ways, Spielberg presented Schindler's List as if it were something out of time, a film from the Golden Age of Hollywood, in terms of acting and staging.

With Son of Saul, director Laszlo Nemes makes no attempt at the artifice of prestige Hollywood cinema.  Stylistic and stylish choices are used to make clear to the audience that the situation in which Saul Auslander lives is entirely bleak and without hope.  This Nazi machine to kill Jews that we call the Holocaust is an industry, and its factory workers are dead men and women walking.  You do whatever you need to get the job done, even if you have to shoot prisoners one by one and dump their bodies in pits because the machinery is temporarily clogged or the backlog of those to be processed is too long.

Saul's desperate plot to save the boy-who-could-be-his-son's body is only that – an act of desperation.  It is something a dead man does so that at least one of his last gasps will taste sweet.  Saul and practically all the other Jewish prisoners are already dead.

Son of Saul is a damning work of art.  This is high art as a cave painting on the consciousness of lovers of cinema and movie buffs.  Son of Saul is a recreation... or is it a reminder of a time so terrible that it haunts the past, present, and future of our species.

Posted by Leroy Douresseaux at 4:42 AM