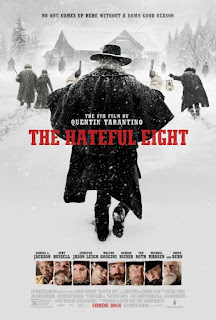 The Hateful Eight is the 8th film from writer-director Quentin Tarantino.  A Western and mystery-thriller, The Hateful Eight focuses on two bounty hunters, a prisoner, and a new local sheriff who find themselves stranded in a cabin with a collection of nefarious strangers.  At least one of those strangers may be connected to the prisoner.

The Hateful Eight opens in the dead of a Wyoming winter some years after the Civil War.  O.B. Jackson (James Parks) drives a stagecoach through the snow-covered landscape.  Aboard his stagecoach is bounty hunter, John Ruth the Hangman (Kurt Russell), and his prisoner, Daisy Domergue (Jennifer Jason Leigh).  Ruth is taking Domergue to Red Rock, Wyoming where she is to be tried and hanged for her crimes.

The stagecoach comes across a second bounty hunter, Major Marquis Warren (Samuel L. Jackson), who was transporting three dead bounties to Red Rock when his horse died.  It takes some convincing, but Ruth allows Warren to board the stagecoach.  Shortly afterwards, former Confederate, Chris Mannix (Walton Goggins), who claims to be heading to Red Rock to assume the job of sheriff, hails the stagecoach.  It takes some talking, but Ruth also lets him aboard.

A sudden blizzard forces this quintet to seek shelter at the stagecoach stopover, Minnie's Haberdashery, but Minnie (Dana Gourrier) is nowhere to be found.  Instead, they are met by Bob (Demián Bichir), a Mexican who says that Minnie is visiting her mother and has left him in charge; Oswaldo Mobray (Tim Roth) who claims to be Red Rock's hangman; Joe Gage (Michael Madsen), a quiet cowboy; and General Sanford Smithers (Bruce Dern), a former Confederate officer.  John Ruth and Marquis Warren believe that at least one of the men they have found at Minnie's is in league with Daisy Domergue, but which one and when will he strike?

Although The Hateful Eight displays Quentin Tarantino's signature blend of wisecracking social commentary, action, humor, and over-the-top violence, this film is not like Tarantino's more popular films:  Pulp Fiction (1994), Inglourious Basterds (2009) and Django Unchained (2012).  These three films received best picture Oscar nominations, while The Hateful Eight did not.  The Hateful Eight is a parlor-room drama, but the parlor room is set up like a stage for live theater.

The other three films were wide-ranging epics full of hyper-kinetic violence.  They are flashy examples of Tarantino's bravura film making, while The Hateful Eight is quiet and edgy and brimming with malice, menace, and venom.  More than half the characters in The Hateful Eight really are fucking hateful, and that is a ratio that can be off-putting for the audience.

But not for me.  I would put The Hateful Eight in the top half of Tarantino's filmography.  This isn't Tarantino's best dialogue or screenplay for that matter, but his execution is impeccable, as usual.  The Hateful Eight is a riveting piece of work, three hours of glorious film narrative, and I enjoyed every minute of it.  I wanted more.

Besides Tarantino's stellar work, there are a number of good performances in this film.  Samuel L. Jackson, a Tarantino regular, gives his best performance in a lead role in years.  He gives the sly Marquis Warren layers, from vengeful former slave to death-dealing former P.O.W., but Jackson suggests that there is so much more to this man that it would take at least two movies to discover what is inside him.

Jennifer Jason Leigh also turns Daisy Domergue into so much more than what she seems.  Her performances is built on subtle changes in note; it is a bouquet of scents meant to keep the viewers on their heels when it comes to what her motivations are.  Joined at the hip with Kurt Russell, who also gives a spry, spicy turn, they make a good pair.  Walton Goggins also surprises, especially since his career, thus far, has been filled with oddballs who are odd for the sake of being an oddity in a film.

Ennio Morricone's score and the film's soundtrack offer a nice backdrop, heightening the sinister mood of the story.  The Hateful Eight might not be a Tarantino audience favorite; it is too slow for the kick-ass crowd.  However, I think that it is a masterpiece, a great modern Western that stands with the very few great Westerns of the previous four decades.


The text is copyright © 2020 Leroy Douresseaux. All Rights Reserved. Contact this blog or site for reprint or syndication rights and fees.

Posted by Leroy Douresseaux at 2:11 AM