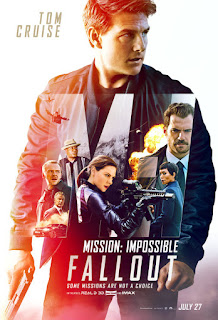 Mission: Impossible – Fallout opens two years after the events depicted in Rogue Nation, which saw Agent Ethan Hunt (Tom Cruise) and his IMF team take down Solomon Lane (Sean Harris), the anarchist mastermind who was the leader of the international criminal consortium, the Syndicate.  Now, the remnants of the Syndicate have reformed into the terrorist organization known as “the Apostles.”

Hunt and his two longest serving IMF teammates, technical field agent, Benjamin “Benji” Dunn (Simon Pegg), and IMF agent Luther Stickell (Ving Rhames), are in Berlin, Germany to buy three plutonium cores from Eastern European gangsters before the Apostles do.  The mission goes awry, which forces Hunt to track the cores to whomever or whatever organization now has them.  The person who may know the cores' whereabouts or have them is the mysterious Alanna Mitsopolis a.k.a. “the White Widow” (Vanessa Kirby).

Erika Sloane (Angela Bassett), the new Director of the CIA, is furious at Hunt and current Secretary of the IMF, Al Hunley (Alec Baldwin), for failing to secure the plutonium.  Director Sloane insists that one of her agents, August Walker (Henry Cavill), an assassin working for the CIA's Special Activities Division, accompany and Hunt and his IMF team to Paris to meet the Widow.  What Hunt doesn't know is that a recent ally, former MI6 agent, Ilsa Faust (Rebecca Ferguson), is also tracking Hunt, and her mission may or may not be a danger to Hunt's.

The recent film, Fallout, is the best of this second trilogy or second lot of films.  It certainly lives up to both the words “mission” and “impossible” in its name.  Every thing upon which Ethan Hunt embarks is a mission; these can't be adventures or mere chases because every move has a purpose.  The “impossible” comes in because the missions always involve these impossible set pieces, and Fallout sets a new standard in M:I insane set pieces.

Tom Cruise may be Hollywood's most consistent action movie star and its most ambitious.  As of the release of Fallout, the M:I film franchise was 22-years-old, with the seventh and eighth installments already preparing for release in 2021 and 2022 respectively (as of this writing).  One can call M:I III a bit of a box office misstep (but not by much), but as of Ghost Protocol, the franchise has been bigger, better (in some ways) and tastier with each new film.  Fallout, to date, is Tom Cruise's most extravagant, deliriously fun film, blending mind-bending action set pieces with brutal, physical, man-to-man fights that are sometimes to the death.  Cruise is so hungry to blow our minds ever more with each film that he actually was hurt performing a crazy and dangerous stunt himself.

In Christopher McQuarrie, Cruise seems to have found the perfect director for his aspirations for this franchise.  McQuarrie began his Hollywood career as a screenwriter and won an Oscar for writing The Usual Suspects.  In the last decade, however, he has proved to be a director of imaginative and inventive macho films that balance high octane action and conspiratorial intrigue.  McQuarrie gives us meat-and-potatoes action films, but the meat is of a high quality and the potatoes are sustainable and artisanal.  It is no coincidence that this already-good franchise has found a way to improve since McQuarrie began directing it and writing its screenplays.

The supporting cast is also excellent, with Ving Rhames and Simon Pegg finding places to shine next to Cruise's supernova.  Angela Bassett chews up two of her scenes; it is easy to take this magnificent actress for granted.  Of course, you will regret it.  I have to admit Henry Cavill impressed me in a way he has never before, and I have to say that I loved every moment of Rebecca Ferguson.  And it is always good to see Alec Baldwin.

At the end of my review of Rogue Nation, I wrote, “Seriously, Tom Cruise is as glorious as ever as Ethan Hunt.”  That remains true, and Mission: Impossible is also as glorious as ever.  I love it so much that I will say even to people who are not fans of the franchise: see Mission: Impossible – Fallout.  For a moment while I was watching this film, I thought to myself, “M:I has replaced James Bond.”  Yikes!

Posted by Leroy Douresseaux at 8:21 AM