Review: "Knives Out" a Fresh Cut of Murder Mystery 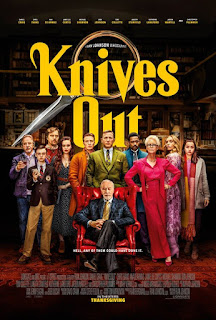 Knives Out is a 2019 mystery film written and directed by Rian Johnson.  The film is a modern whodunit and a murder mystery inspired by the works of the legendary mystery novelist, Agatha Christie.  Knives Out focuses on a master detective investigating an eccentric, combative family after the family's patriarch is found dead.

Knives Out introduces wealthy crime novelist, Harlan Thrombey (Christopher Plummer).  He has invited his family to his Massachusetts mansion for his 85th birthday party.  The following morning, Harlan's housekeeper, Fran (Edi Patterson), finds Harlan dead, with his throat slit.  Local police Detective Lieutenant Elliott (LaKeith Stanfield) believes Harlan's death to be a suicide.  However, an anonymous party among the family has secretly paid private eye, Benoit Blanc (Daniel Craig), to investigate Harlan's death as a homicide.  Blanc finds his suspects among the members of the family, and each one is either eccentric or combative.

Blanc learns that Harlan's relationships with his family were strained.  Blanc is keeping an eye on particular members of the family.  There is Harlan's eldest daughter, Linda Drysdale (Jamie Lee Curtis), a real estate mogul, and his youngest son, Walt Thrombey (Michael Shannon).  There is also Joni Thrombey (Toni Collette), Harlan's daughter-in-law and the widow of his late son, Neil, and his son-in-law, Richard Drysdale (Don Johnson), Linda's husband.  Even Harlan's nurse and close friend, Marta Cabrera (Ana de Armas), is a suspect... or at least has knowledge that will answer important questions.  And where is Harlan's grandson, Ransom “Hugh” Drysdale (Chris Evans), the spoiled playboy son of Linda and Richard?

Whodunit... if it is true that someone did anything criminal?  Or is the truth more complicated and too obvious for even world-famous private investigator Benoit Blanc to discover?

Rian Johnson's Knives Out starts with an excellent screenplay, not necessarily in terms of the mystery's plot.  That is mostly just an exercise in genre elements and trappings – similar to the twists and terms found in the works of Agatha Christie and those stories inspired by Christie.  The best of Knives Out is in the characters, the kind that character actors can use to chew up movie scenery.

The cast of Knives Out is comprised of actors who have been at or near the top of their professions in film or television at some point in their careers.  They are not really known as character actors because they have been or still are headliners.  However, they are mostly veteran actors, and they can do what character actors do best, and that is deliver performances that create the kind of characters of which film audiences cannot get enough.

That is what Rian Johnson did with this film.  He composed a topnotch script, and then, he directed his actors to topnotch performances.  The result is a mystery film that grabs the viewers and holds them from start to finish.  I certainly felt as if I could not let stop watching Knives Out; it is truly a fun film to watch.  It is not perfect; there seems not to be enough screen time for some of the best characters, such as Jamie Lee Curtis' Linda Drysdale, Michael Shannon's Walt Thrombey, and Toni Collette's Joni Thrombey.  And Chris Evan's Ransom Drysdale seems misused...

Still, get yourself to Knives Out, dear reader.  It is one of the funniest and most enjoyable murder mystery films in quite some time.


The text is copyright © 2020 Leroy Douresseaux. All Rights Reserved. Contact this site or blog for reprint and syndication rights and fees.