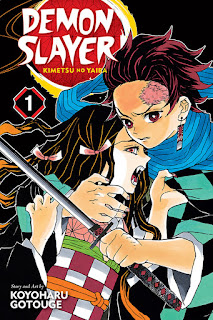 This manga release features story and artwork by creator Koyoharu Gotouge and will be published under the Shonen Jump imprint with an age rating of ‘T’ for Teens. Print MSRP for Volume 1 will be $9.99 U.S. / $12.99 CAN. Demon Slayer: Kimetsu no Yaiba also launches digitally on July 3rd via viz.com and the VIZ Manga App, as well as from the Nook, Kobo, Kindle, iBooks, comiXology, and Google Play stores. Future volumes of this ongoing series will be published in English by VIZ Media on a bi-monthly basis.

In Taisho-era Japan, Tanjiro Kamado is a kindhearted boy who makes a living selling charcoal. But his peaceful life is shattered when a demon slaughters his entire family. His little sister Nezuko is the only survivor, but she has been transformed into a demon herself! Tanjiro sets out on a dangerous journey to find a way to return his sister to normal and destroy the demon who ruined his life.

“In Demon Slayer: Kimetsu no Yaiba, Tanjiro’s life is forever changed when his family is murdered by a demon and his sister becomes infected with its blood,” says Mike Montesa, Editor. “This action-packed series that inspired an upcoming anime will now be available to own with the launch of the first volume this summer.”

For additional information on Demon Slayer: Kimetsu no Yaiba and other manga titles published by VIZ Media, please visit viz.com.