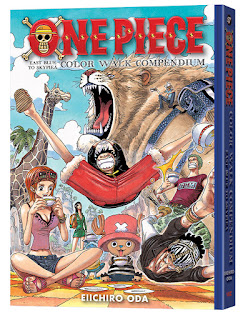 Set for an exclusive print release on July 3rd, 2018, the deluxe hardcover book contains a collection of artwork from the world’s bestselling manga series. The ONE PIECE COLOR WALK COMPENDIUM: EAST BLUE TO SKYPIEA will be published under the Shonen Jump imprint and will carry an MSRP of $39.99 U.S.  / $53.99 CAN.

Enjoy this gorgeous collection of color artwork from Eiichiro Oda’s ONE PIECE! Filled with color images and special illustrations from the world’s most popular manga series, the compendium features over 300 pages of beautiful color art, several large pull-out posters, and interviews between Eiichiro Oda and other famous manga artists, including Akira Toriyama, the creator of DRAGON BALL. This collection contains both volumes of previously released and now out-of-print COLOR WALK art books as well as COLOR WALK 3, which was never released in English, and covers the early parts of ONE PIECE—from the East Blue arc, where the main characters of the Straw Hat pirates first meet, to the Skypiea arc where Luffy and friends face high-flying adventures!

“ONE PIECE COLOR WALK COMPENDIUM: EAST BLUE TO SKYPIEA is the ultimate celebration of Eiichiro Oda’s landmark series and beloved characters,” says Alexis Kirsch, Editor. “This new release will be a vital addition to the collections of ONE PIECE fans.”

ONE PIECE creator Eiichiro Oda began his manga career at the age of 17, when his one-shot cowboy manga, Wanted!, won second place in the coveted Tezuka manga awards. Oda went on to work as an assistant to some of the biggest manga artists in the industry, before winning the Hop Step Award for new manga artists. His pirate adventure ONE PIECE, which debuted in Weekly Shonen Jump magazine in 1997, has over 430 million copies in print and is one of the most popular manga properties in Japan and the rest of the world.

For additional information on ONE PIECE and other manga titles published by VIZ Media, please visit viz.com.

Posted by Leroy Douresseaux at 2:56 AM