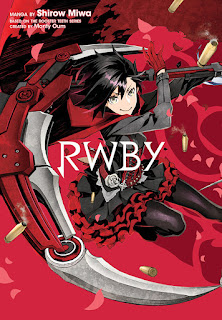 VIZ MEDIA ANNOUNCES THE RELEASE OF THE RWBY MANGA

San Francisco, CA - VIZ Media, LLC (VIZ Media), a premier company in the fields of publishing, animation distribution, and global entertainment licensing, adds action and adventure to its publishing catalog with the release of RWBY on January 16th, 2018.

The RWBY manga is inspired by the popular online anime-style series produced by Austin, TX-based Rooster Teeth Productions. RWBY was the first western-produced anime series to be distributed in Japan. The new single-volume RWBY manga was developed in partnership with Rooster Teeth and will be published under the VIZ Signature imprint with a print MSRP of $12.99 U.S. / $17.99 CAN. The manga is illustrated by the renowned manga creator Shirow Miwa.

RWBY will also be available digitally on January 16th via viz.com and the VIZ Manga App, as well as from the Nook, Kobo, Kindle, iBooks, comiXology, and Google Play stores. RWBY made its English debut in digital editions of WEEKLY SHONEN JUMP.

In RWBY, the world of Remnant is filled with horrific monsters bent on the destruction of humanity. Fortunately, the kingdoms of the world have risen to combat these forces by training powerful Huntsmen and Huntresses at academies around the planet. Ruby Rose, Weiss Schnee, Blake Belladonna and Yang Xiao Long are four such Huntresses in training.

“The RWBY manga works as a prequel to the animated series,” says Joel Enos, Senior Editor. “The chapters include previously unseen backstory about Ruby, Weiss, Yang, and Blake, all enhanced by Shirow Miwa’s artwork.”

Creator Shirow Miwa debuted in UltraJump magazine in 1999 with the short series Black Mind. His next series, DOGS, published in the magazine from 2000 to 2001, instantly became a popular success and is also published in English by VIZ Media. He returned in 2005 with Dogs: Bullets & Carnage, which is currently running in UltraJump. Miwa has also created illustrations for books, music videos and magazines, and produces doujinshi (independent comics) under the circle name m.m.m.WORKS. His website is mmm-gee.net.

For additional information on RWBY and other manga titles published by VIZ Media, please visit viz.com.