"The Dark Crystal" Returns to Theaters in Feb. 2018 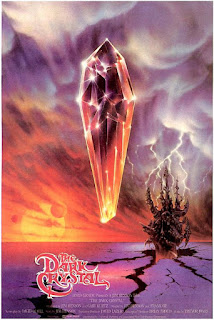 From Co-Directors Jim Henson and Frank Oz, the Film Returns to U.S. Cinemas February 25 and 28 Only, Featuring an Exclusive Interview with Lisa Henson

DENVER--(BUSINESS WIRE)--Thirty-five years after it first stunned audiences and critics with its unprecedented visions and mythic storytelling, Jim Henson’s 1982 epic fantasy-adventure “The Dark Crystal,” co-directed by Henson and Frank Oz, will return to big screens nationwide in a special two-night presentation from Fathom Events, The Jim Henson Company and Universal Pictures.

Newly restored in 4K (at select theaters), “The Dark Crystal” is a visually spectacular tale of a young hero who must find a legendary relic in order restore harmony to the universe. A watershed in fantasy filmmaking produced by Gary Kurtz (Star Wars, The Empire Strikes Back), “The Dark Crystal” will play in U.S. movie theaters on Sunday, February 25, 2018, and Wednesday, February 28, 2018 at 2:00 p.m. and 7:00 p.m. local time (both days).

Each screening of “The Dark Crystal” will also feature a brand-new featurette with Lisa Henson (CEO and President of The Jim Henson Company), who will reflect on the making of the one-of-a-kind film and its creative legacy.

Tickets for “The Dark Crystal” can be purchased beginning Friday, January 12, 2018 online at www.FathomEvents.com or at participating theater box offices. A complete list of theater locations will be available January 12 on the Fathom Events website (theaters and participants are subject to change).

Following its two-day-only theatrical presentation, “The Dark Crystal” will debut on 4K Ultra HD™ and return to Blu-ray™ and Digital March 6 from Sony Pictures Home Entertainment. The Blu-ray will be presented in an all-new collectible Digibook package, complete with rare photos and behind-the-scenes info about the making of this iconic classic.

The ambitious story of “The Dark Crystal” takes place in the world of Thra, which has been torn asunder by a fracture in a great magic crystal, causing two races to be created: the tranquil Mystics, or urRu, and the evil Skeksis, who all but destroyed Thra’s native species, the Gelflings. Now, the Mystics have summoned Jen, one of the last surviving Gelflings, to find the lost piece of the crystal. The quest sends him on an unbelievable adventure that can restore harmony and peace to Thra.

“The Dark Crystal” features performances by Jim Henson as Jen (voice of Stephen Garlick), Kathryn Mullen as the Gelfling Kira (voice of Lisa Maxwell), Frank Oz as the astronomer Aughra (voice of Billie Whitelaw), and Dave Goelz as Fizzgig (voice of Percy Edwards), with Henson, Oz and Goelz also performing as the Skeksis. Kiran Shah also performs the body of Jen, Kira and Aughra. With a screenplay by Dave Odell (“The Muppet Show”), “The Dark Crystal” also features a majestic score by Trevor Jones (Excalibur, Labyrinth).

“Jim Henson created a truly one-of-a-kind experience with ‘The Dark Crystal,’ one that is rarely seen on the big screen,” said Tom Lucas, Fathom Events Vice President of Studio Relations. “Fathom Events could not be more excited about the privilege of working with The Jim Henson Company and Universal Pictures to give movie lovers the chance to see the visual splendor of ‘The Dark Crystal’ in movie theaters.”


About Fathom Events
Fathom Events is the leading event cinema distributor with participating theaters in all 100 of the top Designated Market Areas®, and ranks as one of the largest overall distributors of content to movie theaters. Owned by AMC Entertainment Inc. (NYSE: AMC), Cinemark Holdings, Inc. (NYSE: CNK) and Regal Entertainment Group (NYSE: RGC) (known collectively as AC JV, LLC), Fathom Events offers a variety of one-of-a-kind entertainment events in theaters such as live performances of the Metropolitan Opera, top stage productions including Newsies! The Broadway Musical and George Takei’s Allegiance, major sporting events such as Mayweather vs. McGregor, epic concerts with artists like Grateful Dead and Dixie Chicks, the yearlong TCM Big Screen Classics series, inspirational events such as Steve McQueen: American Icon and In Our Hands, and beloved anime titles like Princess Mononoke and Spirited Away. Fathom Events takes audiences behind the scenes for unique extras including audience Q&As, backstage footage and interviews with cast and crew, creating the ultimate VIP experience. Fathom Events’ live digital broadcast network (“DBN”) is the largest cinema broadcast network in North America, bringing live and pre-recorded events to 897 locations and 1,387 screens in 181 DMAs. For more information, visit www.fathomevents.com.

About The Jim Henson Company
The Jim Henson Company has remained an established leader in family entertainment for over 60 years and is recognized worldwide as an innovator in puppetry, animatronics and digital animation. Best known as creators of the world-famous Muppets, Henson has received over 50 Emmy Awards, two Academy Awards and nine Grammy Awards. The Company is currently in production on the feature film The Happytime Murders, starring Melissa McCarthy, and the upcoming Netflix original series The Dark Crystal: Age of Resistance. Recent credits include Julie’s Greenroom (Netflix), Dot. (Sprout/Hulu), Splash and Bubbles (PBS), Word Party (Netflix), Doozers (Hulu/ Sprout), and the Emmy®-nominated Sid the Science Kid (PBS), and Dinosaur Train (PBS). Television productions include Fraggle Rock, The Storyteller and the sci-fi cult series Farscape. Features include The Dark Crystal, Labyrinth, and MirrorMask. Projects in development include the highly anticipated film Fraggle Rock.

The Jim Henson Company is headquartered in Los Angeles on the historic Charlie Chaplin lot with additional locations in New York and London. The Company is home to Jim Henson’s Creature Shop™, a pre-eminent character-building, and visual effects group, as well as Henson Recording Studios, one of the music industry’s top recording facilities.