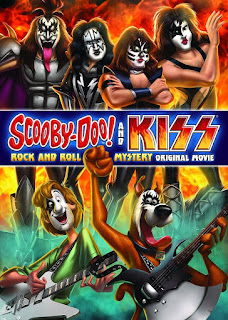 Scooby-Doo! And Kiss: Rock and Roll Mystery is a 2015 straight-to-video, animated, comic mystery film.  It is also the 24th animated movie in the Scooby-Doo straight-to-video series from Warner Bros. Animation, which began in 1998 with Scooby-Doo on Zombie Island.  In Rock and Roll Mystery, Mystery Inc. joins the legendary rock band, KISS, in an attempt to save an amusement park from a marauding witch.

Scooby-Doo! And Kiss: Rock and Roll Mystery introduces KISS World, an amusement park where fans can enjoy and celebrate all things related to the legendary rock band, Kiss (stylized as KISS).  The celebrated members of Kiss:  The Demon (Gene Simmons), The Starchild (Paul Stanley), The Catman (Eric Singer), and The Spaceman (Tommy Thayer) are preparing for a big Halloween concert.  However, the scary “Crimson Witch” is haunting KISS World, screaming “Give Me Rock!” and is scaring all the visitors away.

Meanwhile, Mystery Inc. (a.k.a. “the Scooby gang”): Fred Jones (Frank Welker), Daphne Blake (Grey DeLisle), Velma Dinkley (Mindy Cohn), Shaggy Rogers (Matthew Lillard), and Scooby-Doo (Frank Welker) have traveled to KISS World to see the band, mostly because Daphne has a crush on Starchild.  When the gang discovers that there is a mystery, they insist on helping.  However, the mystery of Crimson Witch spans worlds and dimensions, so how will Scooby and his friends handle their most mind-bending case yet?

As a child, I was a fan of Kiss, although I was not particularly enamored with the band's music.  I did like the stage personas of the band's members, and I liked to imagine the band as a different kind of superhero team.  That is how this most recent Scooby-Doo straight-to-video movie, Scooby-Doo! And Kiss: Rock and Roll Mystery, plays the band:  as a far-out, cosmic band of superheroes who use music and mystical powers to fight evil.

Scooby-Doo! And Kiss: Rock and Roll Mystery is one of the better recent Scooby-Doo movies, specifically because of the inclusion of Kiss.  I am surprised how well Scooby and friends mesh with Kiss.  In fact, Scooby-Doo! And Kiss: Rock and Roll Mystery reminds me of “The New Scooby-Doo Movies” (1972-1974), the Saturday morning animated series that featured Mystery Inc. teaming up with real-life celebrities and well-known animated characters to solve bigger-than-usual mysteries.  I loved that series as a child, which may be part of the appeal of this movie for me.

Still, nostalgia aside, Scooby-Doo! And Kiss: Rock and Roll Mystery is a well made animated film.  The mystery is compelling and the last act features a cosmic-inspired battle that is almost too big for the movie.  This movie is also genuinely funny, with lots of jokes about Kiss merchandising, and the film also gets a lot of mileage out of Daphne's crush on Starchild and Fred's jealousy over it.

Music plays a big part in this movie.  It includes six Kiss songs:  “Rock and Roll All Nite,” “Love Gun,” “Shout It Out Loud,” “I Was Made for Lovin' You,” “Detroit Rock City,” and “Modern Day Delilah.”  Plus, the members of Kiss take part in a joke song for the end credits, “Don't Touch My Ascot.”  The score by Greg Collins and Jared Faber takes its lead from 1970s and early 1980s hard rock, with some synthesizer-imbued music for the big cosmic battle in Kissteria (an alternate dimension).

I hope that Scooby-Doo and Kiss reunite.  The members of Kiss certainly seemed up for their voice-over performances.  If Scooby-Doo! And Kiss: Rock and Roll Mystery is a one-off treat, I can accept that, but this deserves an encore.


Posted by Leroy Douresseaux at 6:35 PM