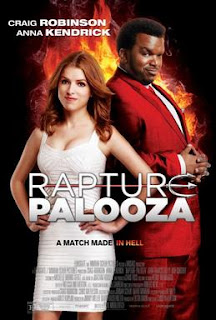 Rapture-Palooza is a 2013 fantasy-comedy film from director Paul Middleditch and writer Chris Matheson.  The film focuses on a young woman and her boyfriend as they try to outwit the Antichrist who wants to impregnate the young woman.

Rapture-Palooza opens with the arrival of the Biblical Rapture, in which the pious, sanctified, and those deemed worthy by (the Christian) God are whisked off to Heaven, while everyone else is left behind.  This begins the Apocalypse, and soon humanity is vexed by falling meteorites, a plague of evil locusts (that yell “Suffer!”), talking crows (that use profanity), storms (that rain blood), and wraiths (who are addicted to smoking pot).

In Seattle, Lindsey (Anna Kendrick) and her boyfriend, Ben (John Francis Daley), are survivors of this Apocalypse, trying to make the best of this bad situation.  They fend for themselves, and even come up with a small business idea – “Good Sandwiches,” a food cart for selling good sandwiches.  However, a politician named Earl Gundy (Craig Robinson) is revealed to be “The Beast” of the Apocalypse.  The Beast is looking for a bride, a nice girl who is a virgin and who will bare him many beastly children.

The Beast discovers Lindsey and demands that she have sex with him and become his bride or he will kill all her family and friends – the ones who were not “raptured.”  Repulsed by his offer, Lindsey and Ben concoct a plan to capture and imprison The Beast, but will their not-really-well-thought-out plan save Lindsey or make things worse for everyone else?

Rapture-Palooza is by no means a great movie or even an exceptional comedy.  However, it is one of the few films that take both a funny and even mocking view of the Rapture and the Apocalypse, and that counts for something.  The scenes depicting the Rapture are probably this film's most inspired moments.  The pace of the movie is slow, and the director relies on dialogue to make the film work.  Also, it must be said that cast and crew make the most of an obviously small budget.

The cast is good, especially the three leads.  Supporting actors like Ken Jeong, Rob Corddry, Thomas Lennon, Paul Scheer, Calum Worthy, and Ana Gasteyer, among others, have some good comic moments, especially the always-funny Corddry.  Fans of off-beat comedy should give Rapture-Palooza a try.  I have to say that I find it funny enough to watch again.


Posted by Leroy Douresseaux at 5:34 PM