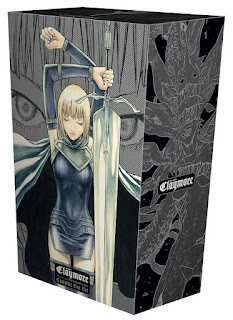 San Francisco, CA – VIZ Media, LLC (VIZ Media), the largest publisher, distributor and licensor of manga and anime in North America, gives readers the opportunity to dive into a pair of acclaimed manga series from start to finish as it delivers comprehensive box set editions for the acclaimed medieval dark fantasy CLAYMORE on October 20th, 2015 and the sexy romantic horror comedy ROSARIO+VAMPIRE on November 3rd, 2015.

Each of the new box set releases feature over twenty individual manga volumes at a substantial savings over buying them individually. Exclusive premiums such as special mini-comics and bonus art collections are also included with each set.

The complete best-selling dark fantasy series is now available in a value-priced box set that includes volumes 1–27, plus an exclusive booklet of black-and-white cover art previously unreleased in the English editions. In a world where monsters called Yoma prey on humans and live among them in disguise, humanity's only hope is a new breed of warrior known as Claymores. Half-human, half-monster, these silver-eyed slayers possess supernatural strength but are condemned to fight their savage impulses or lose their humanity completely.

CLAYMORE series creator Norihiro Yagi won the 32nd Akatsuka Award for his debut work, UNDEADMAN, which appeared in Monthly Shonen Jump magazine. His first serialized manga was his comedy Angel Densetsu (Angel Legend), which ran in Monthly Shonen Jump from 1993 to 2000. His epic manga saga, CLAYMORE, ran from 2001 to 2014 and also was adapted into a television anime series and a video game.

The complete bestselling ROSARIO+VAMPIRE and ROSARIO+VAMPIRE SEASON II series are now available in a value-priced box set that includes 24 volumes of monstrous action, horror, fun and romance, plus an exclusive full-color mini-comic previously unreleased in the English editions. In the series, average human teenage boy Tsukune accidentally enrolls at a boarding school for monsters – no, not jocks and popular kids, but bona fide werewolves, witches, and unnamable creatures out of his wildest nightmares! On the plus side, all of the girls have a monster crush on him, especially far-from-average cute vampire Moka. On the O-negative side, she also has a burning, unquenchable thirst for his blood... Now, can Tsukune and his unlikely group of friends and rivals save humanity from evil monsters?

Posted by Leroy Douresseaux at 10:00 AM