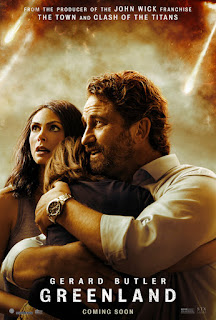 “Greenland” Comes to the United States – On PVOD

DOUGLAS, Isle of Man & BURBANK, Calif.--(BUSINESS WIRE)--Eros STX Global Corporation (NYSE:ESGC) (“ErosSTX”), a global entertainment company, announced that STXfilms’ Greenland, the hit action film that has opened #1 in theaters in 24 territories around the world, will be available to US audiences on all premium video on-demand platforms (PVOD) beginning December 18, 2020 for a $19.99 48-hour rental. The announcement was made today by Adam Fogelson, chairman, STXfilms Motion Picture Group.

“Greenland has been a hit everywhere in the world, so it’s exciting to bring it to American audiences on PVOD.”

Greenland, starring Gerard Butler, has performed better than Butler’s hit Angel Has Fallen franchise in most key territories. The film has already taken in over $45 million in revenue for STX on a $35 million production budget, allowing the film and the studio to be profitable despite challenging market conditions. Greenland continues to roll out theatrically in international markets where the film opened #1 this past weekend in Italy and New Zealand.

Said Fogelson, “Greenland has been a hit everywhere in the world, so it’s exciting to bring it to American audiences on PVOD.”

The film will be available on HBO and to stream on HBO Max in 2021 after its transactional home entertainment run.

In Greenland, a family fights for survival as a planet-killing comet races to Earth. John Garrity (Gerard Butler), his estranged wife Allison (Morena Baccarin), and young son Nathan make a perilous journey to their only hope for sanctuary. Amid terrifying news accounts of cities around the world being leveled by the comet’s fragments, the Garritys experience the best and worst in humanity. As the countdown to global apocalypse approaches zero, their incredible trek culminates in a desperate and last-minute flight to a possible safe haven.

Eros STX Global Corporation:
Eros STX Global Corporation, (“ErosSTX” or “The Company”) (NYSE: ESGC) is a global entertainment company that acquires, co-produces and distributes films, digital content & music across multiple formats such as theatrical, television and OTT digital media streaming to consumers around the world. Eros International Plc changed its name to Eros STX Global Corporation pursuant to the July 2020 merger with STX Entertainment, merging two international media and entertainment groups. The combination of one of the largest Indian OTT players and premier studio with one of Hollywood’s fastest-growing independent media companies has created an entertainment powerhouse with a presence in over 150 countries. ErosSTX delivers star-driven premium feature film and episodic content across a multitude of platforms at the intersection of the world's most dynamic and fastest-growing global markets, including US, India, Middle East, Asia and China. The Company also owns the rapidly growing OTT platform Eros Now which has rights to over 12,000 films across Hindi and regional languages and had 205.8 million registered users and 33.8 million paying subscribers as of June 30th, 2020. For further information, please visit ErosSTX.com.

STXfilms, a division of Eros STX Global Corporation, is a next-generation film studio that produces, acquires, distributes, and markets motion pictures at scale. From blockbusters like Hustlers, Bad Moms, and The Upside to hits like The Gentlemen, Molly’s Game, and The Gift, STXfilms produces star-driven films for a global audience. In just 5 short years, its slate of films has already grossed over $1.8b in global theatrical box office. With a wide range of partners including Universal Pictures Home Entertainment and Showtime (which handle the physical and premium television releases of STXfilms content, respectively), the studio is a fast-growing, industry powerhouse.

Posted by Leroy Douresseaux at 4:49 PM