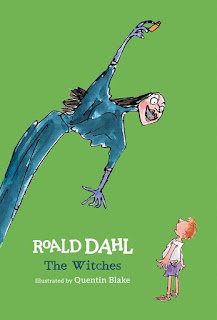 The Witches is a 1983 children's dark fantasy novel written by the British author, the late Roald Dahl.  The book was published with almost 100 full-page and spot illustrations by Quentin Blake (who illustrated many of Dahl's works).  This review is based on a hardcover edition of The Witches published in September 2019 by Puffin Books, an imprint of Penguin Random House.

The Witches is narrated by an unnamed young British boy who recounts his and and his grandmother's experiences battling a society of child-hating witches.  Some people are familiar with The Witches through two film adaptations, director Nicholas Roeg's 1990 adaptation, which starred Anjelica Huston, and the recently released 2020 film directed by Robert Zemeckis.

The Witches opens in Norway where we meet the story's narrator, an unnamed seven-year-old English boy whose parents were Norwegian immigrants to England.  After his parents are killed in an accident, the boy goes to live in Norway with his grandmother, whom he calls “Grandmamma.”  He has already previously spent much time with her, and he loves all her stories, especially the ones about horrific witches who seek to either kill human children or to transform them into animals.  It turns out that Grandmamma is a retired witch hunter, and she tells the boy how to spot witches.  They all look like ordinary women, but they are actually disguising their deformities,  For instance, they have bald heads, have claws instead of fingers, and do not have toes, to name a few of their deformities.

The boy eventually returns to England with Grandmamma in tow, and while on holiday at the grand Hotel Magnificent in Bournemouth, England, the boy has his second experience with witches.  While hiding in the hotel ballroom, the boy discovers that a meeting of the “Royal Society for the Prevention of Cruelty to Children” (RSPCC) is really the annual gathering of all the witches in England.  At that meeting, the boy sees something that almost no human has ever seen – the Grand High Witch, leader of all the world's witches.  And nothing can prepare the boy for the Grand High Witch's diabolical plan to get rid of all the human children in England.

I remember when Nicholas Roeg's film adaptation of The Witches was originally released, and I planned to see it but never did.  I have been putting off seeing the film ever since, but when I heard about Zemeckis' then-upcoming adaptation of The Witches, I chose the book as one of my Christmas 2019 gifts.  After finally reading it, I wish that I had read The Witches a long time ago.  I feel it could have been a formative reading experience for me when I was young.

That aside, it is a fantastic novel.  I am amazed that Dahl could create such evocative and vivid prose in writing for children.  Well, I guess that's why he is beloved by generations.  From the moment he introduces the unnamed boy, Dahl transports readers into another world, one that is fantastical, but one in which the readers will want to believe.

I also love that Dahl makes both the boy and his grandmother, who is 86 in the book, both plucky and adventurous.  The boy is not afraid of new things, and his child's sense of wonder and nosiness makes him not afraid to try new things and to go new places, as well as to try dangerous things and to go to dangerous places.  The boy is one of those classic characters onto which the readers will graft themselves in order to follow him on an incredible and perilous journey.  The witches of The Witches are unique and scary, but are also a little pathetic and funny, which is enough to make them creepy.

The best thing that I can say about Roald Dahl's The Witches is that when I got to the end of its 200 pages, I could have read another 200 pages.  Also Quentin Blake's illustrations are the perfect accompaniment to the novel.  I feel like the world of The Witches as my mind imagines it should look similar to the way Blake presents it.

I READS YOU RECOMMENDS:  Of course, fans of Roald Dahl should read and re-read The Witches, and fans of great children's literature will want to fight The Witches.

[This volume includes a 16-page from another Roald Dahl book, Charlie and the Chocolate Factory.]

Posted by Leroy Douresseaux at 10:34 AM