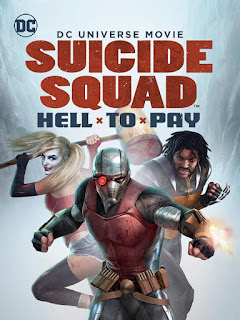 Suicide Squad: Hell to Pay is a 2018 straight-to-video animated superhero film from Warner Bros. Animation.  A part of the “DC Animated Movie Universe,” this film stars the DC Comics antihero super-team, the Suicide Squad.  Hell to Pay finds the squad on a mission to obtain a powerful mystical object that a lot of other powerful people also want.

Suicide Squad: Hell to Pay opens three years in the past.  Amanda Waller (Vanessa Williams) has dispatched Task Force X, her “Suicide Squad” of super-villains and disgraced superheroes, to retrieve stolen intelligence.  By the end of the mission, Floyd Lawton a.k.a. “Deadshot” (Christian Slater) proves his absolutely loyalty to Waller.

In the present, after learning that she is diagnosed with a terminal illness, Waller reassembles Task Force X with a new roster:  Harley Quinn (Tara Strong), Captain Boomerang (Liam McIntyre), Killer Frost (Kristin Bauer van Straten), Copperhead (Gideon Emery), and Bronze Tiger (Billy Brown), with Deadshot as their leader.  Their mission is to find a man whose current identity is that of “Steel Maxim” (Greg Grunberg), a male stripper/dancer.  By a chance of … fate, Maxim is in possession of a mystical black card with the words, “Get Out of Hell Free,” emblazoned across it.  The card is indeed a magical item that will allow a person who is damned, upon death, to get out of hell free.

Task Force X, however, is not the only party interested in obtaining Maxim's card.  Professor Eobard “Zoom” Thawne, also known as “Reverse Flash” (C. Thomas Howell), and his two cohorts, Silver Banshee (Julie Nathanson) and Blockbuster (Dave Fennoy), have been chasing the card for some time.  Plus, Scandal Savage (Dania Ramirez) and her brawny girlfriend, Knockout (Cissy Jones), have their own specific reasons for wanting the card.  But there is one who seeks the card who is so cunning and so powerful that it may take all the other seekers' powers to stop him from getting it.

The story, focusing on the quest for the card, is a mere contrivance, but the action, especially the brutal fights and violent battles, makes this movie a joy to watch.  There are some dry patches in this film, but the superhero-fantasy violence and the impudent, rude, murderous, and entertaining characters make up for the times when the film slows down.

Tara Strong is … strong in her voice performance as Harley Quinn.  Billy Brown is all righteousness and pathos as the thoroughly likable Bronze Tiger, and Christian Slater is surprisingly slow and steady as Deadshot.  Slater is successful in making Deadshot the center of this 15-ring circus of crazy super-powered people looking for that magical card.  I hated that live-action Suicide Squad film from 2016, and I find the Suicide Squad comic books that DC Comics has published over the last decade to be a bore.  But I am down with animated Suicide Squad.  The best thing that I can say about Suicide Squad: Hell to Pay is that after it ended, I really wanted more.

Posted by Leroy Douresseaux at 5:19 PM