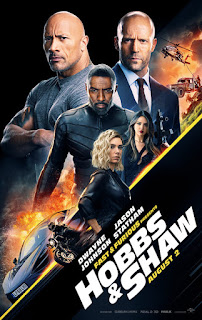 Fast & Furious Presents: Hobbs & Shaw is a 2019 action movie from director David Leitch.  It is a spin-off from The Fast and the Furious movie franchise.  Hobbs & Shaw focuses on a federal agent and a mercenary who are forced to work together to keep a super-human villain from obtaining a deadly virus that could lead to human extinction.

Fast & Furious Presents: Hobbs & Shaw opens in London where Hattie Shaw (Vanessa Kirby) and her team of MI6 agents attempt to retrieve a virus, known as “Snowflake.”  This virus can be programmed to decimate millions of people, and the mysterious terrorist and tech organization, “Eteon,” wants it.  Brixton Lore (Idris Elba) is an Eteon operative with advanced cybernetic implants inside his body that allow him to perform superhuman feats.  Eteon has assigned Lore to obtain Snowflake, but before he can do so, Agent Shaw escapes with the virus.  So Lore uses Eteon's media sources to brand Shaw a traitor who killed her team.

Lawman Luke Hobbs (Dwayne Johnson) is a federal agent working for the DSS (Diplomatic Security Service).  Deckard Shaw (Jason Statham) is a former British Special Forces assassin-turned-mercenary.  Hobbs and Shaw are both informed of the missing Snowflake virus and are assigned to work together to find it and Hattie Shaw, who is Deckard's estranged sister.  Hobbs and Shaw have a troubled history together and refuse to team-up.  However, Brixton Lore's advanced cybernetic implants give him strength and speed far beyond that of normal humans.  He is practically a “Black Superman,” and if Hobbs and Shaw want to stop him, they will have to stop him together.

Fast & Furious Presents: Hobbs & Shaw is not a great movie, but it is an entertaining action movie.  If you, dear reader, like the crazy car chases offered by The Fast and Furious franchise, Hobbs & Shaw offers wreck-filled automobile chase scenes that recall the great Mad Max: Fury Road.  Luxury sports cars, souped-up trucks, military vehicles, motorcycles, drones, and more tear across roads, onto walls, and over buildings.  This is a non-stop thrill-machine of car chases, crashes, and wrecks.

I do have to be honest.  I think Dwayne Johnson and Jason Statham's screen chemistry seems forced.  It will probably get better in potential sequels.  Personally, I am not crazy about actress Vanessa Kirby; she just doesn't work for me.  Idris Elba delivers a good performance, but he could have made Brixton Lore a remarkable villain is this film's screenwriting were better.

Hobbs & Shaw also offers some surprise appearances by actors who are not featured or emphasized in any of the film's trailers and previews:  Ryan Reynolds, Kevin Hart, and Helen Mirren.  Reynolds and Hart are actually quite good in their supporting roles; Mirren's role (as Magdalene Shaw, Deckard and Hattie's mother) feels contrived and forced.  If there is a sequel to this film, Reynolds and Hart must return in bigger roles.

I do think that Fast & Furious Presents: Hobbs & Shaw runs too long by about 15 or 20 minutes.  The last act is mixed – exciting action set pieces, but the family reunion melodrama is forced.  Maybe the thing that keeps Hobbs & Shaw from being as good as the best Fast & Furious films is that too much of it feels forced.  The filmmakers want this movie to be “2 fast, 2 furious,” but the movie often feels too forced and too contrived.  They need 2 relax.

Fast & Furious Presents: Hobbs & Shaw has the ingredients to start a quality action movie franchise.  Warts and all, this first movie is a good start.

Posted by Leroy Douresseaux at 5:27 PM